The Great Risks of a Second U.S. Civil War 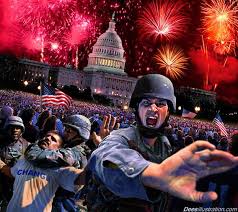 All serious social analysts and more and more generally intelligent and knowledgeable Americans realize the danger of an Implosion of the vast U.S. financial Bubbles and debts leading to a more general social-political Implosion of of the U.S., a major social disintegration including warfare involving military, veteran and other guerrilla groups.

Soviet Russia Imploded very quickly after many years of growing stagnation from central planning and regulation and monetary-financial tyranny  and internal conflicts similar to what we have been experiencing for several decades, though they did not have the immense problems of debts and financial Bubbles that we have. It came as a total shock to the CIA and other official U.S. analysts. But it is very common in the modern age around the world when vast empires like the U.S. vastly “overstretch” their military forces, finances, debts, commitments, central planning, transfer payments, regulations, and so on. Over the past century, almost all the  remaining, once great empires imploded in various ways and disappeared or went through revolutions to get out of the awful trap of runaway socialism or fascism. Some like China, have been through many horrendous civil wars, implosions, and rebuilding with outside help in my life time of 76 years.

When the Soviets imploded there was fighting in the streets of Moscow and beyond. But the West moved in with financial help to stabilize them, because in part of the danger of “loose nukes,” guerrilla and other groups getting control of some of their vast nuclear forces. The U.S. actually helped them greatly to prevent this, but we still do not know if there are some Soviet loose nukes sitting  out there in waiting for the right occasion.

The Soviets only had about $100 billion in unpayable foreign debts, chicken feed compared to the U.S. which has way over $2 trillion in unpayable debts to China alone, a non-friend, plus much more to sheiks and others who loathe us in secret.

The U.S. is totally over-stretched here and around the world in every way and rapidly declining, suffering vast paper-inflation booms and busts, and declining economically, losing financial power as the world flees the unreliable dollar, even running up trillions in foregone infrastructure repairs from education to cyber-systems to roads and bridges.

There are vastly more massive private armaments in the U.S. and many millions of highly trained vets who are “mad as hell” about what is  happening in the U.S. When the U.S. Bubbles finally implode for the final count-down and the Fed et al. cannot pump them back up after Lehman’s implosion caused an implosion of the whole top of the U.S. financial system, the U.S. will implode financially and social-political implosion, including some kind of A Second U.S. Civil War, is very possible.

When that happens, as I believe it is now very likely it will, the danger of loose nukes that might be used in a civil war situation will be of overwhelming importance. The U.S. rulers know this and are now moving to try to consolidate top-down control of nukes, prepare for general, military marshall law, and much more. They are also now purging “unreliable” officers in direct control of all U.S. nuclear weapons.

One former military officer who is very bright, knowledgeable and honest, as I  have learned over many  years, has summarized below his estimate of one of the most serious possibilities of loose nukes and some other major, possible paramilitary actions by vet. groups. He prefers to remain anonymous for obvious reasons.

We are in no way trying to “scare” Americans and the world and do not intend our analyses to get into the mass media. I just turned down another invitation to talk about such things on a radio talk program. We believe intelligent Americans should know of these dangers to prepare to meet them as best they can when they happen. I certainly am not dealing with these dangers as part of any political action groups to reform America. I tried that for decades and Americans did not listen. They will not listen to David Stockman, Paul Craig Roberts, Ron Paul and many other former financial political officials even now. I believe, unfortunately, that “REFORMS!” of the immense magnitude that would be required very quickly are impossible.  Though I solemnly hope I am wrong when the historical record on the final days of The First U.S.  are written, my grim view is that the U.S. will follow the ancient rut of empires to self-ruination. I do not predict when, which I think is impossible, but I fear it will be soon. So serious preparations for the worst are the most reasonable path to follow at this time.

Remember, almost all Americans are now dependent on government and have no rural safety net to fall back on for food or anything else, as almost every one has had in other empires and in the U.S. in earlier financial implosions, such as The First Great Depression. When The Totally Corrupt System finally destroys itself, you will have to save yourself and your family until a workable society is rebuilt from the foundations up. When the U.S. and its allies annihilated empires like Germany and Japan and Italy, there was mass starvation and general suffering, but the U.S. et al. moved in quickly to save the people and make them puppet-allies of the U.S. Global Empire. No one is big enough to save us and make us loyal puppets. You must save yourself.

A Retired Officer Analyses One Extreme Risk Of Loose U.S. Nukes And Other Aspects Of A Second U.S. Civil War

I don’t know if my observations about [nuclear] sub capabilities from the past are true any longer. I can imagine a system that would preclude a ship from retargeting without external command. They could have an encrypted target package such that only targets with the proper encryption key would be accepted. This would limit flexibility somewhat, since changing targets would require outside communication, but that is a tradeoff that might be made by an increasingly paranoid regime that, when politicians visit, disarms troops in combat zones, and doesn’t let troops carry weapons on US bases.

In my day, which is about 30 years ago now, a launch could be conducted without the Captain’s consent. It would have required physically bypassing some permissive circuitry and launching without CO authority during a drill –though since the right kind of drill is ordered from outside command authority, and the ship doesn’t know when or if such a drill will occur, it would merely be opportunistic. After one missile was away, everyone would know, and immediate action would probably be taken to stop another launch, but one MIRVed missile could do a lot of damage. I think a senior enlisted tech could probably have pulled it off. Also, in the old days, we had subrocs, which were essentially nuclear depth charges, and there is no way to prevent a mutinous sub from launching a weapon like that without permission.

If the system hasn’t been changed to something like I described above, and a CO and enough crew went rouge, they could retarget all missiles and launch with virtually no inhibitions. I doubt there is any way to prevent a rogue launch, but if the system has changed to prevent retargeting, the only thing they could do would be to launch on an assigned target to elicit retaliation. However, no system is perfect, so I suspect with a cooperative crew, there may be ways to work around even an encrypted system. And of course, there is no systematic way to prevent ships from using their guns or subs from launching torpedoes. We didn’t have cruise missiles so I don’t know how their targeting works, but I’d guess that with tactical weapons the ship can select targets.

The knowledge on this side of the ocean about how to take out an MRAP actually came from enemy practices in Afghanistan…..as well as other info, like how to avoid drones, FLIR, night vision, etc. This information is readily available on the internet. There is an element of ex-military, police, and ordinary citizens, actively preparing to defend against the coming tyranny. Howmany there are, how effective they may be…who knows….their biggest problem being operational security. With all the information available on the web, all these groups and individuals with any contacts or organization are likely already compromised. Also, there is now a group called “Oath Keepers,” people inside the police and military that have taken an oath to refuse orders that violate their oath to the Constitution. Will they really resist when push comes to shove?  All of them may not, but some will. I think we both know that the only chance of effectively resisting government tyranny is with a significant number of police and military units on the side of the good guys. Except these days, that doesn’t have to mean large numbers, and could actually occur mostly from individuals in key positions acting on their own.  And small groups, acting in concert, like say, an air wing, or a carrier, could be a big force multiplier.  Rogue special forces units would be particularly dangerous to the regime, as they can generally move about freely, their activities are shrouded in secrecy, and any actions they took would be demoralizing to the forces aligned with the regime.

BTW, a very similar situation is depicted in the old sci-fi series, Babylon 5.  A president is assassinated, the military divides into a small group that supports the old Republic and a larger group that supports the new regime….maybe it would be more accurate to say, follows the orders of the new regime, since it isn’t a matter of support as much as failure to recognize that the system that previously legitimized their existence has been destroyed. The dynamics of how events play out in this context are pretty well represented.

The Best of Jack D. Douglas

Jack D. Douglas [send him mail] is a retired professor of sociology from the University of California at San Diego. He has published widely on all major aspects of human beings, most notably The Myth of the Welfare State.

2 thoughts on “The Great Risks of a Second U.S. Civil War”