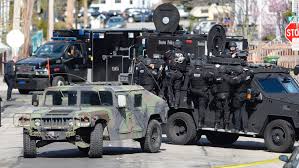 Imperial wars on humanity will continue. New targets will be chosen. Independent governments will be attacked. New world order rules demand unchallenged global dominance. The worst of all possible outcomes may follow. State-sponsored terror facilitates it.

Fear-mongering, lies and damn lies replace truth and full disclosure. Muslims became public enemy number one. Who’ll suffer most with them this time?

Vital information is suppressed. Fingers point the wrong way. Innocent victims are blamed for state-sponsored terror. More on that below.

“(O)ur country was attacked with deliberate and massive cruelty,” he said. “We have seen the images of fire and ashes and bent steel.”

He omitted what’s most important. Washington bore full responsibility. The worst of all possible worlds followed.

On April 18, Obama addressed a Holy Cross Cathedral interfaith prayer service. “(I)n an instant, the day’s beauty was shattered,” he said. “A celebration became a tragedy. And so we come together to pray and mourn and measure our loss.”

“We will find you,” he added. “And yes, you will face justice. We will hold you accountable.” Truth and full disclosure always loses out.

One suspect was arrested. The other fled. He’s now in hospitalized in serious condition. Police discovered his whereabouts and shot him. Officials later said the one taken into custody died. Allegedly he was killed in a “violent standoff.” Cold-blooded murder is more likely.

He won a city of Cambridge $2,500 scholarship. He’s a second year medical student. His father said both brothers were “set up.” They “killed my older son Tamerlan,” he added.

Over 10 years ago, both brothers came to America with their family. They’re not terrorists.

Colleges and universities closed for the day. Local businesses were told not to open. Thousands of officers made house-to-house searches. Swat teams are involved. Some areas were evacuated. Helicopters patrol overhead. Police cars are everywhere.

Greater Boston’s never seen anything like this before. It’s surreal. It resembles a bad film plot. It gets round-the-clock coverage. Managed news misinformation substitutes for cold hard facts.

Infowars headlined “Did Boston Bombing Suspect Try to Surrender?” An image showed him lying prone with his arms outstretched. He held no weapon. None appeared near him.

“At the starting line this morning, they had bomb sniffing dogs and the bomb squad out there. They kept announcing to runners not to be alarmed, that they were running a training exercise.”

Their attire was later “revealed to be standard issue Craft International clothing.” The skull logo on one man’s cap identifies Craft.

Why were both men and others with them in Boston? Images show around 10 wearing similar attire. Nearly all had on black backpacks. They resembled those alleged to contain pressure cooker bombs.

Why were they near the marathon’s finish line? Perhaps their mission was a black ops. They’re experts in these type operations.

Why did FBI operatives join them? Images show them talking. An FBI truck was visible. Why were FBI agents searching for one bombing suspect before the incident took place?

Stephen Lendman lives in Chicago. He can be reached at lendmanstephen@sbcglobal.net.

Visit his blog site at sjlendman.blogspot.com.

It airs Fridays at 10AM US Central time and Saturdays and Sundays at noon. All programs are archived for easy listening.