Pair at Capitol charged with criminal trespass with a deadly weapon 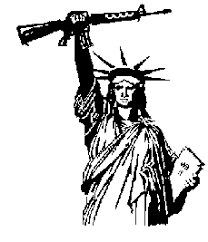 A small gun rights rally at the state Capitol Saturday ended in a big hubbub when two demonstrators were taken away by Texas Department of Public Safety officers.

Both men are part of Open Carry Texas and had black powder revolvers in holsters, said Victoria Montgomery, a spokeswoman for the advocacy group.

A DPS spokesman would not release the names of the men, but Travis County jail records confirmed that Justin Delosh, 30, was charged with criminal trespass with a deadly weapon. The name of the second man could not be confirmed with jail records Saturday evening.

Montgomery said the pistols the men carried were manufactured before 1899, are not classified as firearms under state law and are legal to carry under laws prohibiting the open carry of handguns.

Texas Penal Code 46.01 exempts certain guns made before 1899 from the definition of “firearm.”

Others at the demonstration — which Montgomery said drew about 40 people — brought rifles and put them in their cars at the start of the rally per officers’ requests, Montgomery said.

The rally and the arrests happened as hundreds crowded the Capitol to celebrate the Texas Book Festival, which ends Sunday.