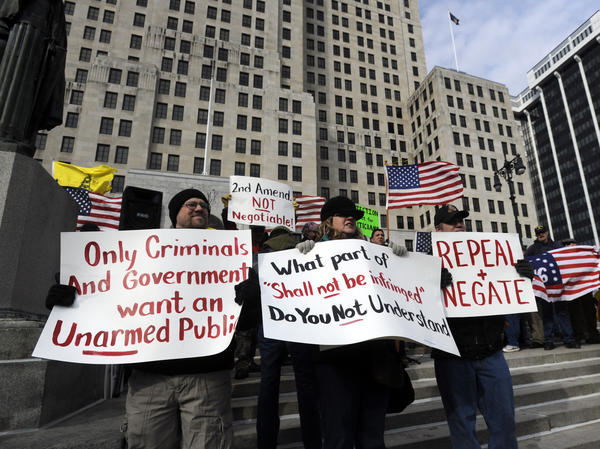 The U.S. needs to keep a close watch on the growing threat of home-grown extremist groups.

There are, in increasingly frightening numbers, cells of angry men in the United States preparing for combat with the U.S. government. They are usually heavily armed, blinded by an intractable hatred, often motivated by religious zeal.

They’re not jihadists. They are white, right-wing Americans, nearly all with an obsessive attachment to guns, who may represent a greater danger to the lives of American civilians than international terrorists.

The Southern Poverty Law Center, which has been tracking hate groups for 30 years, released its latest report on the growth of these organizations this week. Its findings were, to say the least, alarming. The center divides its subjects into militias, which are mostly groups of weekend warriors who train for combat against imaginary foes; hate groups, which target minorities; and “patriot” groups, whose beef is with the U.S. government. Patriot groups first began surfacing after the massacre of a bizarre sect by federal agents in Waco, Texas, in the early 1990s. They showed their teeth in 1995, when a patriot adherent blew up the federal building in Oklahoma City.

Since then, the patriot movement has been growing at a blistering pace, especially following the election of PresidentObama in 2008, according to the report. From just 149 groups in 2008, the number jumped to 512 in 2009 and has been rising sharply since. In 2012, it hit 1,360. Now that Obama is seriously pushing for tougher gun laws, further growth is a near certainty. The result? There’s no knowing, but some kind of serious attack is increasingly possible.

Patriot groups are motivated by a host of anti-government attitudes, but their primary focus is guns. They are convinced that the government is out to seize their weapons, even though most legislation is focused on keeping guns out of the hands of criminals or restricting the types of weapons that can be sold. Many are also united by belief in an outlandish one-world government conspiracy theory positing that the United Nations is poised to strip away American property rights and impose socialism on us all.

What can be done to reverse this tide of belligerent ignorance? Not much. The typical patriot acts within his free-speech and 2nd Amendment rights, and in fact most patriot activity consists of venting steam by meeting with like-minded Neanderthals and firing off blog posts threatening civil war. Yet such blather tends to get under the skin of the Timothy McVeighs of the world. These groups should be closely monitored, with resources adequate to the task, even if it means shifting some homeland security money from the hunt for foreign terrorists.

17 thoughts on “Peril from ‘patriots’”