Tasers Have Killed at Least 500 Americans 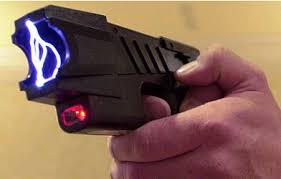 The Taser, the non-lethal law enforcement weapon that is meant to incapacitate criminals without causing great harm, has killed at least 500 people last decade. The real number of casualties might be even higher.

In the period between 2001 and early 2012, the stun-gun Taser devices used by law enforcement across America have claimed the lives of 500 people.

Amnesty International, the worldwide advocacy group that condemns torture and human rights violations, delivered the news this week with a report released Wednesday. In it, they reveal that the recent death of a Georgia man who died as a result of a Taser blast puts the body count brought on by the device at 500 in barely a decades’ time.

Despite being branded as a non-lethal alternative to firearms, hundreds of Americans have died from Taser blasts.

On Monday this week, law enforcement responded to a call of a drunk and disorderly person in Houston County, Georgia. When they arrived at a bar, the man in question, 43 year old Johnnie Kamahi Warren, was already on the ground. According to the local Dothan Eagle, a sheriff’s deputy still deployed blasts from a Taser gun on the man. Twice. He died moments later and now the officer who fired those shots is being investigated, all while on paid administrative leave.

Warren is number 500 on the list of Taser-related casualties, and Amnesty International says that number is too high to warrant a wake-up call this late in the game.

“Of the hundreds who have died following police use of Tasers in the United States, dozens and possibly scores of deaths can be traced to unnecessary force being used,” Susan Lee, Americas program director at Amnesty International, writes in a press release. “This is unacceptable, and stricter guidelines for their use are now imperative.”

Over the last decade, hundreds of others like Warren have died either directly or as a result of Taser blasts. Law enforcement continues to use the tools, however, and many feel that often that’s a decision that could be avoided.

In a 2008 report titled USA: Stun weapons in law enforcement, it was revealed that 90 percent of the Taser casualty cases studied involved a victim that was unarmed. Droves of Americans are left dead by Taser blasts every year and in many cases it is revealed that they posed little threat to the officers responsible.

One victim that was executed in 2009 by Taser was only 15 years old. Another person twice that age was victimized that same year by Tasers, but it took 19 blasts from trigger-happy cops to kill that man.

Another recent victim, Billy Walters III, was shot by Tasers in a separate Georgia incident. He was intoxicated when cops arrived, and although he repeatedly told them “I give up,” they acted by firing several blasts into the man.

Walters was hanging from a ledge during the assault. He fell and was later rendered paralyzed.

“Even if deaths directly from Taser shocks are relatively rare, adverse effects can happen very quickly, without warning, and be impossible to reverse,” Amnesty International’s Lee adds. “Given this risk, such weapons should always be used with great caution, in situations where lesser alternatives are unavailable.”

Even with this warning and countless others, however, Tasers continue to be a routine weapon used by law enforcement. After a 2008 incident that left a 17-year-old boy dead after a Taser attack, a federal court ruled that Taser International, the maker of the guns, did not provide adequate warning or instruction to the Charlotte Police Department responsible for the death, and that proper knowledge could have prevented the casualty from occurring.

A federal jury said that Taser International should compensate the family of the slain boy to the tune of $10 million. The manufacturer is planning on appealing that decision.

“I’m glad the verdict was in our favor, but we’re definitely not celebrating,” the mother of slain Darryl Wayne Turner told the Associated Press last year. “It cannot bring back my son’s life. Hopefully, it will help others in the future dealing with Tasers.”

A year later, however, the body count continues to rise.

Amnesty says that between the states of California, Florida and Texas, around 200 people have been killed by Tasers in the last decade in just those three states.The website Truth…Not Tasers put a figure of North American Taser-related deaths at 682 last year.

4 thoughts on “Tasers Have Killed at Least 500 Americans”