The Tyranny Of The Majority The Patriot Act’s Mandated Silence 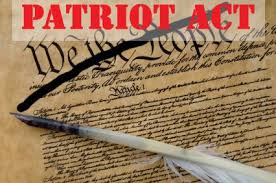 In 1798, when John Adams was president of the United States, the feds enacted four pieces of legislation called the Alien and Sedition Acts. One of these laws made it a federal crime to publish any false, scandalous or malicious writing — even if true — about the president or the federal government, notwithstanding the guarantee of free speech in the First Amendment.

The feds used these laws to torment their adversaries in the press and even successfully prosecuted a congressman who heavily criticized the president. Then-Vice President Thomas Jefferson vowed that if he became president, these abominable laws would expire. He did, and they did, but this became a lesson for future generations: The guarantees of personal freedom in the Constitution are only as valuable and reliable as is the fidelity to the Constitution of those to whom we have entrusted it for safekeeping.

We have entrusted the Constitution to all three branches of the federal government for safekeeping. But typically, they fail to do so. Presidents have repeatedly assaulted the freedom of speech many times throughout our history, and Congresses have looked the other way. Abraham Lincoln arrested Northerners who challenged the Civil War. Woodrow Wilson arrested Americans who challenged World War I. FDR arrested Americans he thought might not support World War II. LBJ and Richard Nixon used the FBI to harass hundreds whose anti-Vietnam protests frustrated them.

The Patriot Act permits FBI agents to write their own search warrants and gives those warrants the patriotic and harmless-sounding name of national security letters (NSLs). This authorization is in direct violation of the Fourth Amendment to the U.S. Constitution, which says that the people shall be secure in their persons, houses, papers and effects from unreasonable searches and seizures, and that that security can only be violated by a search warrant issued by a neutral judge and based upon probable cause of crime.

The probable cause requirement compels the feds to acquire evidence of criminal behavior about the person whose records they seek, so as to prevent politically motivated invasions of privacy and fishing expeditions like those that were common in the colonial era. Judges are free, of course, to sign the requested warrant, to modify it and sign it, or to reject it if it lacks the underlying probable cause.

The very concept of a search warrant authorized by law enforcement and not by the courts is directly and profoundly antithetical to the Constitution — no matter what the warrant is called. Yet, that’s what Congress and President Bush made lawful when they gave us the Patriot Act.

When FBI agents serve the warrants they’ve written for themselves — the NSLs as they call them — they tell the recipient of the warrant that he or she will commit a felony if he or she tells anyone — a lawyer, a judge, a spouse, a priest in confessional — of the receipt of the warrant. The NSLs are typically not served on the person whose records the FBI wants; rather, they are served on the custodians of those records, such as computer servers, the Post Office, hospitals, banks, delivery services, telephone providers, etc.

Because of the Patriot Act’s mandated silence, the person whose records the FBI seeks often never knows his or her records have been seized. Since October 2001, FBI agents and other federal agents have served more than 350,000 search warrants with which they have authorized themselves to conduct a search. Each time they have done so, they have warned the recipient of the warrant to remain silent or be prosecuted for telling the truth about the government.

Occasionally, recipients have not remained silent. They have understood their natural and constitutionally protected right to the freedom of speech and their moral and fiduciary duty to their customer or client, and they have moved in federal court either to suppress the warrant or for the right to tell the customer or client whose records are being sought that the FBI has come calling. Isn’t that odd in America — asking a judge for permission to tell the truth about the government?

What’s even more odd is that the same section of the Patriot Act that criminalizes speaking freely about the receipt of an agent-written search warrant also authorizes the FBI to give the recipient of the warrant permission to speak about it. How un-American is that — asking the FBI for permission to tell the truth about the government?

Last week in San Francisco, U.S. District Court Judge Susan Illston held that the section of the Patriot Act that prohibits telling anyone about the receipt of an FBI agent-written search warrant and the section that requires asking and receiving the permission of the FBI before talking about the receipt of one profoundly and directly infringe upon the freedom of speech guaranteed by the First Amendment. And the government knows that.

We all know that the whole purpose of the First Amendment is to encourage open, wide, robust debate about and transparency from the government. Our right to exercise the freedom of speech comes from our humanity, not from the government. The Constitution recognizes that we can only lose that right by consent or after a jury trial that results in conviction and incarceration.

But we can also lose it by the tyranny of the majority, as Congress and the president in 1798 and 2001 have demonstrated.

Andrew P. Napolitano, a former judge of the Superior Court of New Jersey, he has written seven books on the U.S. Constitution.