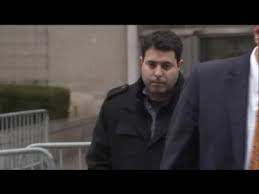 A sergeant with the New York Police Department was arrested Monday on child pornography charges after police allegedly found a cache of illegal videos on his computer.

CBS New York reports that Randazzo appeared at a hearing in Queens Criminal Court Tuesday. The station notes that Randazzo allegedly “used Internet chat rooms to instruct an unidentified woman how to perform sex acts with infants and toddlers.”

According to the news outlet, Randazzo allegedly directed “a naked, female adult to sexually abuse an infant in diapers, and another little boy who was no more than one or 2 years old,” in one instance instructing the woman to put her hand inside an infant’s diaper and “talk dirty to him.”

If convicted, Randazzo could face 15 years in prison.

This is the latest scandal to rock the NYPD recently. Last year, Gilberto Valle, the so-called “cannibal cop,” was arrested after his plans to allegedly kill and eat women he met on the Internet were uncovered. Earlier this week, Valle’s defense struck a blow when a judge refused to admit “gruesome” evidence against him.

In June 2012, former NYPD officer Michael Pena admitted to raping a school teacherin 2011, months after a jury failed to convict him.