Five Types Of Looters You Must Prepare For 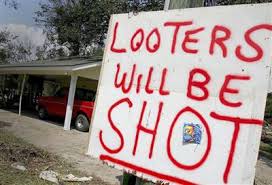 It’s Survival Diva again with some food for thought about societal collapse; what to expect and who to look out for. It’s an important part of the puzzle when you’re one of the few prepared to survive the coming onslaught. Some guesstimate preppers make up only 5% of the populace, but it’s my belief it’s closer to 3% at best, and more likely to be 1-2%. Many give lip service to prepping and claim to be prepared when the truth is they’re still in the “thinking” stage.

They haven’t advanced to in-the-trenches preparedness that many need to do to get prepared faster, where dinners out, budget-draining vacations, and designer anything are put on the back-burner until the storage shelves are full, water has been stored, and must-have preparedness goods are crowding sheds, basements, or in a pinch; closets and under the bed.

To come out on the other side of a wide-spread crisis in one piece, even when you’re prepared, takes getting into the head of the majority of the population who are NOT prepared. If you’re successful, you’ll face, head-on, the darker side of humanity most of us would rather pretend doesn’t exist.

Yesterday I was given a small example. When purchasing another 20 buckets for food storage, a Home Depot employee kindly offered to help me load them into the back of my SUV. Looking at the 200 pounds of sugar and another 200 pounds of flour crowding the back—I’m planning to use it for barter when the time comes—he asked; “What’s with all the buckets and the baking stuff?” This was my cue to wake up another person who’ll be sorely disappointed when meals on wheels doesn’t come to their aid in a wide-spread emergency. Besides, I knew I could safely talk to him without worry of him showing up at my doorstep if things go south. I live 90 miles away and I pay with cash for my preparedness goods and NEVER use rewards cards, where my personal purchases are tracked.

So I told him I write about prepping and I practice what I preach. Our discussion revealed he had attempted to start prepping, yet every time he stored the items in the basement, his teenagers helped themselves to his emergency stash. I asked if he had a shed that could be padlocked to keep his prepping goods intact, which he did. His answer, however, was disappointing: “My wife would kill me if I put the bikes outside to store preparedness goods.”

I left the parking lot shaking my head in sadness with the realization this man represents the majority of people, including many reading this very article. They may have that gut-wrenching intuition that things aren’t quite right, and they should be getting ready, but they have become entrenched with today’s norms and are over-consumers with the belief the government will step in if things get really bad. Like this man, many would-be preppers just haven’t marshaled their strength to lock horns with loved ones, even when it’s for their own good, nor can they stomach being labeled paranoid.

Get Into The Heads of Those to Watch For

In a collapse, not all looters are created equally. There will be varying degrees of how far a person is willing to go to survive. But even the best, most honest of people will be desperate for food and water. It’s a good idea to consider who might be approaching your doorstep beforetrouble shows.

Stan, the Family Man:  He has loved ones that he desperately wants to protect. He ignored the hassle of preparedness. He even ignored FEMA’s suggestion of storing three days worth of emergency food and water. Money has been tight once his hours were cut since the economic slow-down. He’d thought about selling the jet skis and investing in storage food, but it was just too depressing. Now a wide-spread emergency has decimated grocer’s shelves in a matter of hours. Water is scarce and there are rumors of many in the area getting sick after drinking non-purified water from a nearby lake. The toilet won’t flush, sewage has backed up in the tub and there is no electric. Communications are down and he and his family are without hope. The first two days, he’d held out hope that help would arrive. But it hasn’t and his family is hungry and thirsty and frightened. Stan has always paid his dues, and would normally never think about stealing from others. But, that was then. He must do whatever it takes to provide for his family. The cooking smells coming from across the hallway of his apartment building has set a plan in motion. Survival has come down to them or him…

Toni, the Prisoner: When the lights went out, security at the prison was compromised. Most of the jail guards left for home at first sign of trouble. Now, the tables are turned and Toni and several other inmates have escaped. Toni and his group are on foot, but that doesn’t present a problem because their rural location offers plenty of opportunities. The farmers in the area have fruits and vegetables ripe for the picking. Several in the vicinity raise horses. Now that he and the other inmates broke out of prison, Toni considers himself lucky; the problem of food and transportation is solved…once he and the five other inmates have overtaken the family they’ve targeted.

Scorpion, the Gang Member:  Scorpion, a member of a major gang is, mad at life and knows he’s entitled to survive because he’s young and strong. He’s willing to do whatever it takes without remorse.  He and his homeboys have plenty of firepower and ammunition: the tools of their trade. They can’t wait to take what they need, just for the sheer sport of it. And it’s proven to be as easy as stealing candy from a baby. Several home invasions produced more than enough food, water and medical supplies. What didn’t interest them was grabbed and sold on the black market to desperate customers. The best part is they didn’t even have to leave the city. There’s more than enough to keep the gang well fed. Along the way, they’ve picked up an arsenal. Ammo is now so plentiful, it’s moved past need and has been sold for more than what gold and silver is fetching. The few police combating the looting and killing don’t have the manpower to take down his gang, and they’re on a rampage.

John, the Tactically Trained: For the past two days, John has had to watch his neighbors go into meltdown. They’re without food and water, as is John. One of his neighbors is a diabetic with no way to get insulin. They can’t call their doctor—cell and land line phones haven’t worked for days. Plus, the roads are in complete gridlock. The gas stations ran out of fuel within 24-hours of the crisis and many frantic motorists trying to flee ran out of gas, or experienced car problems, leaving their vehicles to clog the roadways.

John feels for his neighbor, but he has loved ones. They are his number one priority and he’s run out of time. John and several of his hunting buddies have decided it’s time to search for survival goods, taking their ATV’s. John’s military training now comes in handy. As leader of the group, he knows to head outside the suburb he lives for the boonies where it’s more likely there will be plentiful food and water and preparedness goods. They’ve agreed not to hurt anyone, so long as they’re allowed to take what they need. John knows what to look for: the sound of a generator or lights shining through windows. This is his signal a homeowner is prepared. During the day his group listens for the tell-tale sounds of a generator, a chainsaw, or a motorized vehicle, which isn’t hard to do now that the grid’s down. For days, things have been eerily silent. At night, John and his hunting buddies look for the tell-tale glow of lights reflecting from windows. In no time, they have what they need and will return to this rural goldmine on an as-need basis.

Brenda, the Naysayer: Brenda laughed when her co-worker, Sarah, shared her prepping plans. Now, the streets are over-run with desperate folks. The stores have been looted. Grocers, sporting good stores and gun shops were the first to get hit. But there have been plenty of  TV’s, computers and high-ticket electronic items pilfered, even though they’re no good to anyone at present. The family car has an empty gas tank, but she’s in good health and so is the rest of her family. It’s just blind luck Brenda knows where Sarah lives, and the awesome part is she isn’t far—only a couple of miles away. Her family is into bicycling, so the problem of transportation is solved; They’ll just zip past the gridlock, baring looters, that is. The rest of Brenda’s plan lies with the knowledge that Sarah is kindhearted.

She’ll put Brenda and her family up until order is restored, which from the looks of things could be a long time. Brenda and her husband throw what little they have in their pantry (what they can handle weight-wise, anyway) into backpacks and pillowcases. Next, they clear out the medicine cabinet. They tried to use their ATM card for cash just yesterday, so they wouldn’t show up empty-handed—they’d never want to be seen as free-loaders—but the grid is hopelessly crashed, so no luck there, and all businesses are closed, including the banks. But Brenda doesn’t necessarily see that as a deal-breaker. She did everything she could, other than fill her pantry and get preparedness goods. And besides, Brenda has two adorable kids…how can Sarah say no?

Will You Be A Victim?

Desperate families, prison inmates, gang-bangers and freeloaders will be out there during a full-on collapse. The first thing you want to do is to get prepared so that you aren’t one of them.  Next, how you handle desperate people and whether you come out on the other side alive has a lot to do with planning beforehand. Here are some pointers. Hopefully, you have some of your own to share by commenting below:

Most of us, if given the opportunity, would choose to help others, and many preppers who can afford to have put aside extra canned goods to help others. But there is a world of difference between helping someone in need and becoming a victim of someone who plans to steal your preparedness goods with force. It’s important to agree amongst family or group members how you will address likely scenarios, so if the time comes, you’ll be able to react as a cohesive group. Hesitation can kill you!

8 thoughts on “Five Types Of Looters You Must Prepare For”