The suspect in a fatal stabbing spree on a Portland, Oregon, commuter train yelled remarks about “free speech” as he entered the courtroom where he was being arraigned on Tuesday on charges of attacking bystanders who intervened when he shouted religious slurs at two women of Muslim appearance.

Suspect Jeremy Joseph Christian, a 35-year-old convicted felon, entered the courtroom yelling “Free speech or die, Portland. You got no safe place. This is America – get out if you don’t like free speech.”

He is charged with murder in the fatal stabbing of two men who intervened when he shouted religious slurs at two women who were the subject of the religious slurs on Friday. A third man who tried to step in was also stabbed but survived.

About a dozen protesters in the hall outside the courtroom erupted into shouting while the charges were read.

As he was escorted out of the courtroom after the arraignment, Christian shouted, “Death to the enemies of America. Leave this country if you hate our freedoms. … You call it terrorism. I call it patriotism.” 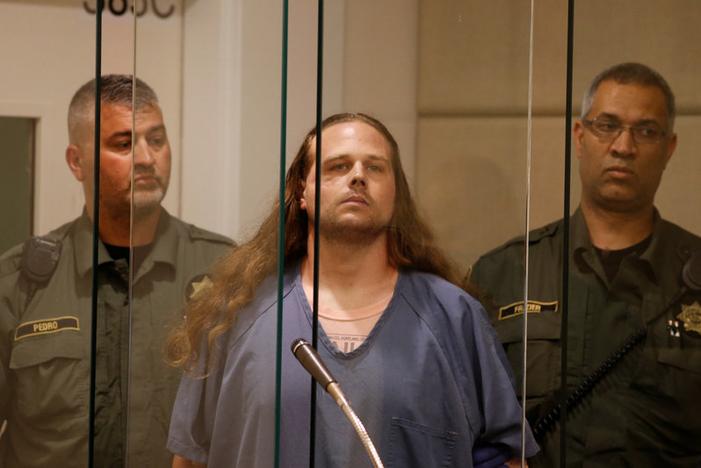 The surviving victim of the attack, Micah Fletcher, sat in the front row of the gallery during the arraignment, with a long, sutured wound visible on his neck.

If found guilty of the murder charges, Christian could face either life imprisonment or the death penalty.

One of the two women who was the target of the religious slurs on Friday, Destinee Mangum, who was with a friend wearing a Muslim head scarf, said in a video posted on CNN’s website on Monday that she did not know the men who intervened and thanked them for putting their lives on the line.

Trump condemned the stabbings on Monday, calling them “unacceptable.” “The victims were standing up to hate and intolerance. Our prayers are w/ them,” he said on Twitter.

Trump’s remarks came after the Council on American-Islamic Relations (CAIR) called on him to condemn the rampage and speak out against what the advocacy group sees as an increase in anti-Islamic sentiment. Anti-Muslim incidents increased more than 50 percent in the United States last year, it said.

Asha Deliverance, the mother of Taliesin Myrddin Namkai-Meche, one of the two men who was killed on Friday, in an open letter to Trump that was posted on social media on Tuesday, urged the president to condemn “acts of violence, which result directly from hate speech.”

According to The Oregonian, a witness to the stabbings said Namkai-Meche’s last words before being taken away by paramedics were, “Tell everyone on this train I love them.”

On Monday, Portland Mayor Ted Wheeler called on federal authorities to rescind a permit for a June 4 “Trump Free Speech Rally” and not to issue a permit for a June 10 “March Against Sharia.” In a Facebook post, he said, “Our community’s anger is real, and the timing and subject of these events can only exacerbate an already difficult situation.”

The Oregon chapter of the American Civil Liberties Union replied with a statement on Twitter warning against censoring “unpopular speech.”

The Federal Bureau of Investigation is investigating the attack to determine whether to charge Christian with terrorism or a federal hate crime, Portland FBI spokeswoman Beth Anne Steele said.