When the world ends, our cities will crumble and be reclaimed by nature. At least, that’s the popular image. But you don’t need to wait for the apocalypse to see how things will crumble. You don’t even need to leave civilization—there are plenty of glimpses of the post-apocalyptic world hidden right among us.

It would be impossible for Manhattan’s Public School 186 to be any more in the middle of civilization. Businesses are open across the street, there isn’t a free parking space in sight, and people stroll by nonchalantly. It’s boarded up, but it’s the trees growing out of the windows which give away the fact that no one has used the building for over 40 years. Inside, piles of rubble and scattered animal corpses complete the look.

The school was opened in 1903 but ran into problems in the early 1970s. Its floor plan didn’t meet fire safety codes and the ground floor doors had to remain open at all times to ensure that children couldn’t be trapped. Those open doors soon led to problems. Criminals robbed parents at knifepoint and a teacher’s aide was raped in a classroom. When fire inspectors found that the fire alarm didn’t work in 1972, the school was marked for closure. It shut down in 1975.

The building was due to be renovated in the 1980s, but the Boys and Girls Club of Harlem that bought it decided to demolish the building and start again. Residents petitioned to save the building, but the owners say that it would be too expensive. While they battle it out, the building continues to look increasingly like a set from I Am Legend. 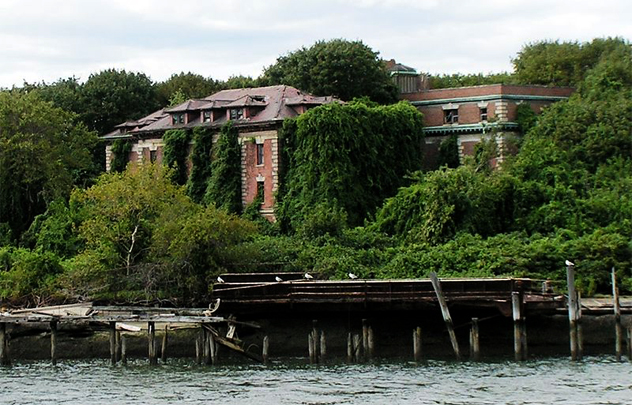 Located just half a kilometer (.3 mi) from Manhattan in New York’s East River is a bird sanctuary known as North Brother Island. In the 1880s, people with infectious diseases were quarantined there at the Riverside Hospital. Its most famous resident was Typhoid Mary, who died on the island in 1938. The island later housed veterans from World War II and was the base of a drug treatment center. In 1964, the last people left and it was closed to the public.

A few people have been let back onto the island between September and March when the birds aren’t nesting. Among the thick vegetation that now covers the island are huge brick buildings, bungalows, and a chapel. One classroom still has dozens of old books scattered across the floor. The buildings are all slowly being hidden by trees and ivy.

Christopher Payne, a photographer who was given permission to visit the island, described it as “what would happen if people left the planet.” He described the atmosphere as a sense of being disconnected from the rest of the world, though it turned out to be impossible to forget how close the rest of New York City was. “I could hear the Mister Softee truck sometimes,” he said.

Naumachia were mock naval battles that took place in flooded coliseums in ancient Rome. Gladiatorial combat is a staple of post-apocalyptic fiction (you can thank Mad Max 3). So if you want to host your own dystopiannaumachia, Miami’s Marine Stadium is the perfect venue.

The 6,600 seat arena was opened in the 1960s as a venue for speedboat racing. It was closed in 1992 after Hurricane Andrew and has since become a haven for graffiti artists and freerunners. It’s an imposing, poured-concrete structure. The stadium’s designer said that he had intended to create “a piece of sculpture on the water reflecting on what nature was providing us.”

There’s debate over what to do with the stadium. The Friends of Miami Marine Stadium want to see it cleaned up and returned to use. Others believe it should be left as it is, a monument to the graffiti artists who have adopted it over the decades. 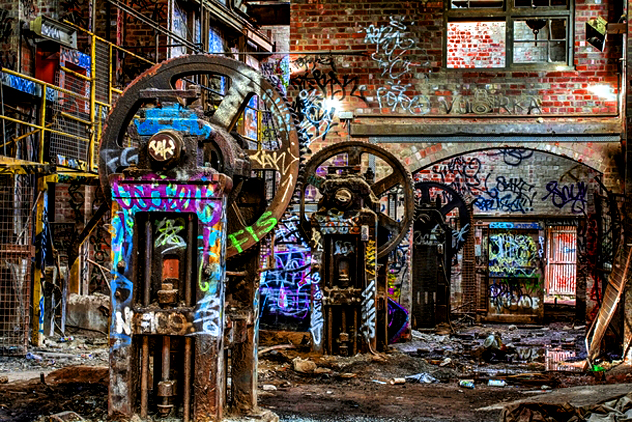 Melbourne’s Box Hill Brickworks adds a steampunk theme to its derelict charm. The brick-making plant was built in 1884 and operated for a century. It was closed in 1988, but its brick chimney still towers over the local landscape.

The real charm is hidden inside. Mazes of walkways hover above masses of rusting machinery. There are even hand-written sales records scattered in an old office. The site is a time capsule of technologies. A tramway and blacksmith’s shop are essentially unchanged from the 1880s.

The world-gone-to-hell atmosphere is completed by the landfill on the same grounds. It looks like a normal grassy field—except for the plumes of flamethat occasionally burst from the ground. When methane from the buried waste isn’t exploding by itself, local youngsters have been known to drop matches into sinkholes to trigger blasts underground. This all takes place very close to people—the barbed-wire fence for the brickworks borders a park that is usually full of playing children. 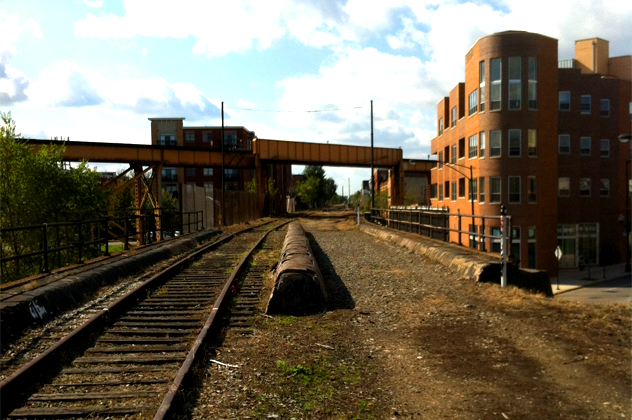 If you’ve ever wondered what urban hiking will be like once the end comes, Chicago’s Bloomgindale Railway will give you a fairly good idea. This three-mile-long abandoned railway is elevated above the busy city. After it was abandoned by Canadian Pacific Railway in 2001, its overgrown tracks became popular as a route for joggers and cyclists. In winter, it also offers the unique experience of cross-country skiing through the middle of a busy city where every street is plowed.

The feel of an unattended city isn’t going to be around for much longer, however. Search for Bloomingdale Railway and half the pictures show a train track being reclaimed by nature. The others are artists’ impressions of the mass restoration project that will soon turn the track into a modern park and walkway. While undoubtedly good for Chicago, those who have come to love the railway over the last decade have said that they expect to be nostalgic for the post-apocalyptic landscape.

Centro Financiero Confinanzas is an unfinished skyscraper in Caracas, Venezuela. Construction began in 1990, but a 1994 banking crisis left it incomplete. The 45-story building has a heliport but lacks elevators, utilities, windows, and railings. Since the 1990s, 3,000 squatters have made their home in the unfinished shell. The “Tower of David,” nicknamed after its chief backer who died in 1993, is now the world’s tallest slum.

Motorcycles are used as taxis to carry people up the first 10 floors, and it’s on foot from there to the 28th. No one lives any higher than that, but it is possible to get to the top. There’s makeshift plumbing and electricity in some areas, but it’s the economy that’s sprung up inside that makes it feel like a set from a dystopian movie. Stores, beauty parlors, daycare centers, and even a dentist cater to the residents. Some apartments look cozy, even if the corridors that lead to them are faded and cracked from disuse.

People salvage metal from the higher floors. Others lift weights just feet away from a dizzying drop with no safety rail. Teenagers use the lights from their cellphones to navigate pitch-black stairways. The community has a bad reputation and the people are wary of outsiders. Yet right outside this little world, the surrounding streets look like a typical modern city. 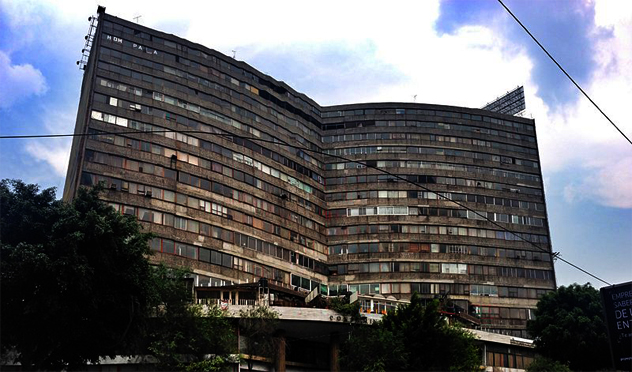 Mexico City’s Insurgentes 300 is a building that went to war with the forces of nature. While it’s technically still upright, you couldn’t really say it won the fight. It’s nicknamed the “Canada” building for the 30-meter (100 ft) word that once ran down the side in giant letters. From the outside, it looks like a deteriorating shell, but behind the broken glass there are all sorts of professions that put the building to some sort of use. Every type of criminal—from lawyers and accountants to drug dealers and prostitutes—use Insurgentes 300 alongside dance teachers and screen printers.

It was once home to 420 offices, but half of these have since been converted for use as housing. The building has a 10-degree inclination due to structural damage from an earthquake in 1985. The authorities ordered it evacuated, but the occupants declined and have been fighting to have the structure repaired for 30 years. Instead of maintenance, they’ve received only lawsuits as the building slowly decays around them. 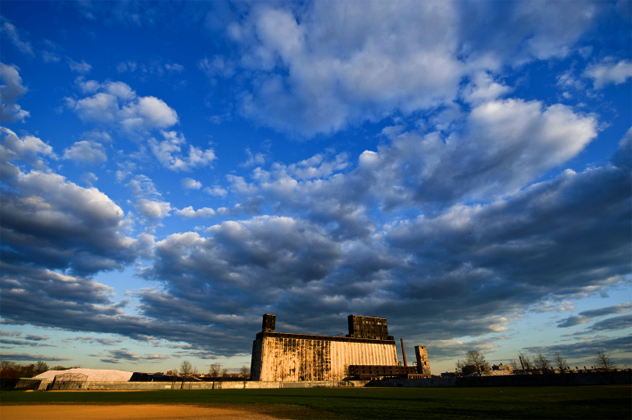 The closest thing New York City has to a fortress is perhaps The New York Port Authority Grain Terminal in Red Hook, Brooklyn. Its concrete walls are 20 centimeters (8 in) thick, 12 stories high, and sheer. It’s a behemoth that looks perfect for fending off a hoard of zombies. In fact, a rag-tag bunch of survivors is pretty much all the building is missing to complete its post-apocalyptic look.

Inside, it looks like a cross between a factory, a prison, and a temple. It’s eerie from a distance, and in fog it looks downright sinister. Several pieces have collapsed into the river, and others look destined to follow. New York’s grain economy was already on the decline before the building opened in 1922. It shut down in the 1960s and is known as the “Magnificent Mistake.”

The building is extremely popular with urban explorers, though it’s difficult to get to. One explorer says that it requires research, persistence, and creativity, but mostly nerve, “since you don’t know what you’ll find inside or who might stop you before you make it in, and the repercussions that come with that.” Even if you’re not interested in the building, the journey may be worth it purely for the amazing sunset you can watch from one of the many shattered windows. 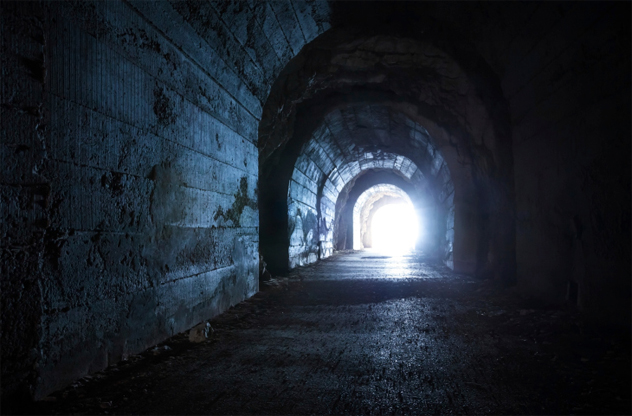 England doesn’t have an official second city, but Manchester and Birmingham are the most commonly suggested candidates. That’s perhaps why each of them is home to miles of underground tunnels built during the Cold War. They’re very literally a glimpse of the apocalypse, since that’s exactly what they were built to withstand. They were also built in secret.

The bunkers under Manchester were tunneled by Polish workers who couldn’t speak English so that they wouldn’t be able to tell anyone what they were doing. It once housed several months’ worth of tinned food designed to keep VIPs alive in case of an attack. In Birmingham, many of the entrances to their system remain classified.

1A Lot Of Meatpacking Plants 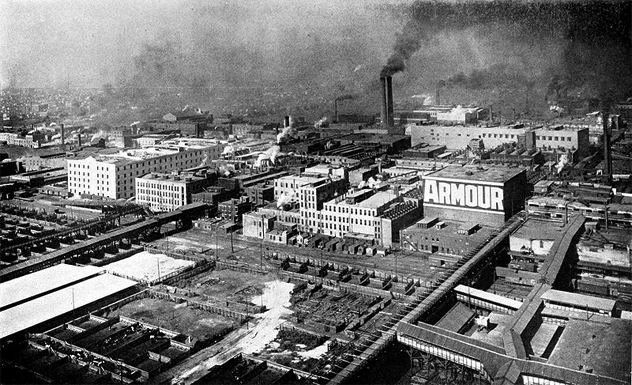 Founded in 1867, Armour & Company was once one of the United State’s largest meatpacking companies. It fell into decline in the late 20th century, and in its wake it left abandoned plants all over the country. One is a skeletal brick building in Fort Worth, Texas, which was ravaged by fires in the 1970s. Demolition was attempted and there’s a section of wall missing.

It turned out that the building’s steel structure was so strong that it was cheaper to just leave the rest standing. Today, it looks like a prison. Guard towers were added in 2007 to make the plant look like a South American prison for the show Prison Break. The words Penitenciaría Federal De Sona were left above one of the doors.

Another meatpacking plant in Navassa, North Carolina was only open for a few years. Rumors began in the 1920s that the plant’s owner was found hanged in the middle of the factory. The building earned a reputation as haunted. Several people committed suicide there in the 1980s, cementing its supernatural foothold in local folklore.

Yet perhaps the most famous abandoned meatpacking plant is in East St. Louis, Illinois. It’s not far from downtown and has the added bonus of still being filled with old machinery. That includes its once cutting-edge refrigeration system. The plant once employed nearly 5,000 people and became a hotbed of racial tension due its segregated workforce. Since it was closed in 1959, it’s become an infamous beacon for those fascinated with the way the world crumbles.

Alan is tempted to take up urban exploration as it’s the only hobby that’s going to get better should the world end.