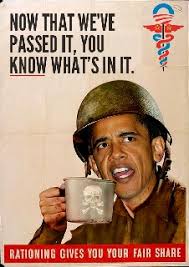 Back in March of 2010, in reference to Obamacare, Nancy Pelosi said, “We have to pass the bill so that we can find out what is in it away from the fog of controversy.”  A red flag if ever one has popped up and every thinking American across the country shouted out in unison, “No, we do not want it.  We do not want to find out what’s in it.”

In short, the majority of Americans never wanted the socialist Obamacare.  Just like today, the majority of Americans oppose gun control and amnesty for the illegals.  Then, just like now, it matters not what the American people want as we are no longer considered the authority, no longer the rulers but rather the ruled.  And as promised by Pelosi, we are finding out what Obamacare is.

It was not to be a tax, remember?  But it had to be, because a mandate would have been unconstitutional.  But wait a minute.  Constitutionally, it cannot be a tax either as any tax legislation must, by law, initiate in the Congress.  Obamacare was initiated in the Senate.  But oh well, it was just a little constitutional chicanery, and it was for our own good, don’t you know.

We were told health insurance costs would not be going up.  In some places we have seen them double and triple already.

We were told that we could keep our doctor if we chose to.  Sorry, but that just didn’t work out.

We were told preexisting conditions would be covered at no extra cost.  Oops, they ran out of funds, I guess that one didn’t pan out either.

Every day we are finding out about a new tax to be levied upon the workers of America to pay for Obamacare, which was supposed to make life easier for us.  I guess ole Nancy was right.  It was probably the only true statement she has ever made.

So what is really behind Obamacare?  Well I’ll tell you.  60 million Mexican nationals are about to be made dual American citizens and by God they have a right to equal access to health care.

Now how do you think so call immigration reform would be going over right now is if was proposed in a fashion of truth, as in “Working Americans, we want to give full amnesty to 60 million foreign nationals?  We are going to, as a part of this action, levy a tax on you to pay for their health care services.”  Who would have stepped up in support?

The fact is we are getting ready to find out a little more that Nancy couldn’t tell us back in 2010, and this will be in the form of cold reality.

All those illegal foreigners filling the emergency rooms to the point that an American national might die, waiting to be seen by a doctor, well they are now going to be at your local doctor’s office and American nationals will be waiting months for an appointment and years for procedures.  And oh yes, you will be at the end of the line, always, because the dual citizens must be given preferential treatment to make up for all the bad things we have done to them.  And don’t even think about making a feint towards the emergency room because they are still going to be overflowing with new illegals, waiting for their chance at amnesty.

Can anyone say “Obamacare Part Two”?

5 thoughts on “All’s Fair in Obamacare”