Drone Warfare and the Constitution

Conservative News and Views – by Terry A. Hulrbut

Even some liberal activists now warn: Barack Obama puts our freedom at risk with his drone warfare program. It amounts to declaring war against a person, and summarily executing him, without trial. Vesting that kind of authority only in the President or his subordinates, breaks faith with both the letter and the spirit of the Constitution.

We reaffirm today the fundamental nature of a citizen’s right to be free from involuntary confinement by his own government without due process of law, and we weigh the opposing governmental interests against the curtailment of liberty that such confinement entails.

On the other side of the scale are the weighty and sensitive governmental interests in ensuring that those who have in fact fought with the enemy during a war do not return to battle against the United States. As discussed above,supra, at 518, the law of war and the realities of combat may render such detentions both necessary and appropriate, and our due process analysis need not blink at those realities. Without doubt, our Constitution recognizes that core strategic matters of warmaking belong in the hands of those who are best positioned and most politically accountable for making them.

The problem: when a government detains a person, that person can ask a judge to say whether the government may do that under the law. This is called the writ of habeas corpus. The Constitution (Article I, Section 9, Clause 2) says only in cases of rebellion or invasion may the government deny this protection.

The drone warfare program has a problem an order of magnitude worse. The government does not propose to detain American citizens (and others) abroad, but tokill them out of hand. That alone goes far beyond the Hamdi case. How can the subject of drone warfare even have time to apply for a writ of habeas corpus? And that analysisnever answers this central question: who may decide that any American has “fought with the enemy during a war”?

Congress may not. For the Constitution also says:

No bill of attainder or ex post facto law shall be passed.

Which means: Congress may not itself judge a person guilty or innocent. Nor may Congress punish someone for doing something that was lawful when he did it but is unlawful today. But under the drone warfare program, we see a (de facto) Presidentacting as sole judge, jury, prosecutor, and executioner.

And the Fifth Amendment says:

No person…shall be deprived of life, liberty or property without due process of law.

And what is due process of law? It means that before the executive may punish someone, it must get a judge to sign off on that. Under the drone warfare program of today, this does not happen.

That Amendment also says the government may not “hold [someone] to answer” for a capital crime without getting a grand jury to indict him. The only exceptions are members of the armed services, or in the militia when Congress has called the militia up. The likely targets of drone warfare fall under neither heading.

Can Congress declare war against persons or groups that are not nation-states? 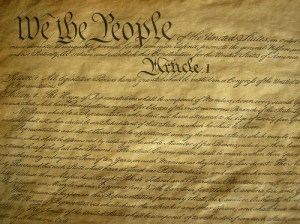 Many libertarians say no. “War” is a state ofdiplomatic relations between and among nation-states, they argue. But the Constitution, in saying that Congress may “declare war,” does not sayagainst whom, or set any limits on the “whom.” The Constitution (Article III) defines treason as making war against the United States or “giving…aid and comfort” to its enemies. If a person can make war against a country, that country can declare war against him. And if that person is a citizen of the country he attacks, what he does is treason. But a conviction in a treason case needs two witnesses. That implies a trial.

The Senate of Rome was the model for the United States Senate. (In fact the US Senate was the first body after the Senate of Rome to have the title of “Senate.”) That Senate set an interesting precedent when in 121 BC it first passed the Senatus Consultum Ultimum against Gaius Sempronius Gracchus. It would pass it again against the first Marcus Aemilius Lepidus in 77 BC, and against Lucius Sergius Catiline in 63 BC.

In each case, the Senate of Rome acted after the particular person (Gracchus, Lepidus, or Catiline) gathered troops and marched against Rome. Those were acts of war, and the Senate answered them with declarations of war. Specifically, by these instruments, the Senate of Rome:

The Congressional Authorization for the Use of Military Force of 2002 similarly declares war on Al-Qaeda. In that respect it imitates the Roman SCU.

But the SCU was very vague on the limits of consular power. The consul Cicero, in 63 BC, used the SCU to prosecute a war against Catiline. Catiline fell in battle, and battle is an exigent circumstance. But Cicero also had several alleged conspirators arrested.Cicero had those men executed without trial. Cicero claimed that the SCU let him do this.

Ordering a drone warfare strike against someone, at the next opportunity, is equal to Cicero’s summary execution of those he said were in cahoots with Catiline. What he did so outraged the public that Publius Clodius Pulcher managed to:

Thus: the experiences of these cases never settled the limits of consular, or general executive, power against former citizens who demonstrably were making war against the government, and their friends. Publius Clodius “did that he did in envy of” Cicero, to paraphrase Shakespeare. So his action set no precedent. And if we don’t know what the government can do against a demonstrable enemy, how can we know what that government may do against a merely suspected enemy?

The Framers of the Constitution inherited the Senate of Rome and all its precedents. (For instance, the veto power of tribunes of the plebs survives today as the Presidential veto.) The Framers clearly thought about dangerous rebels or would-be usurpers. That is why even the original Constitution (before Amendment XIV with its punishments against the Confederate States of America and its officers and soldiers) mentioned “rebellion,” “insurrection,” and “invasion,” and prescribed exceptional treatment of civil liberties for such times.

But equally clearly, the Framers wanted to leave every avenue open to those who disliked the philosophical direction of the country, to change it by peaceful means. The Constitution never defined a rebel. It said only that the government may deprive noperson of life, liberty or property without due process of law. (And it clearly says people may arm themselves.)

Is drone warfare legal, and when?

One may best conclude that yes, a government can declare war against a person who is not a citizen, or a group that has a non-citizen for a leader. Al-Qaeda qualifies. Even Anwar al-Awlaki did not succeed to command of Al-Qaeda. That command is still foreign. (If ever an American-born person does succeed to command Al-Qaeda or any other such group, the Constitution will get its most challenging test: how to square a declaration of war against a citizen, with the no-bill-of-attainder clause.)

Worse than that: By what inherent power does any President say that any one person is a member of any of these groups? Does anyone claim to have captured the Adjutant General of Al-Qaeda, and from him wrung the Roll of Mujahedeen, or whatever they call themselves?

Now obviously a soldier (or sailor, etc.) under attack has the right to defend himself and others. But Anwar al-Awlaki was not in the act of killing, or threatening to kill, anyone. Obama can claim no exigent circumstance to kill Al-Awlaki through drone warfare.

To make drone warfare legal, a judge must confirm any listing of a person as “a member of Al-Qaeda or an affiliated group.” Again, this judgment is not Congress’ to make; that would be a bill of attainder.

Sympathy for a murderer?

Does saying that the de facto President’s policy of drone warfare is dubious, express sympathy for Anwar al-Awlaki, Adam Gadahn, or other American citizens who believe as they do/did? No. It expresses concern for the liberties of other persons whom the government might decide it does not like. The first targets of any oppressive policy arealways those who deserve no sympathy on their own merits. In the matter of drone warfare, Anwar al-Awlaki became the perfect scapegoat. If any person would incur the wrath of a judge, to the extent that said judge would sign his death warrant and hand it to the operator of an armed drone (or that operator’s CO), Anwar al-Awlaki certainly would.

So why didn’t Obama get a judge to sign off on his death? Any police agency can get a judge to sign a search or arrest warrant, any time, day or night. Why not at least make the government “swear out” a warrant to capture, or kill, an American citizen suspected of treason-with-intent-to-commit-murder?

Besides: all that Anwar al-Awlaki seems to have done, is inspire others to murder their fellow Americans. And that they could do so, is only because Americans are still a disarmed populace in most venues. Suppose Army regulations had let the men and women at Fort Hood wear sidearms. Then Nidal Malik Hassan, accused of killing thirteen fellow service members, would have died in a gun battle with his first target. Suppose our city laws did not try to turn our downtowns, and our industrial districts, into gun-free zones. Then any terrorist bent on sabotage or mass murder would die at the hands of the first armed security force he came up against. Where, then, would be the need to use drone warfare to “waste” an American citizen who happened to say, “War against civilization is your duty,” or any other similar claptrap?

This, then, is the weakest part of the government’s case. The only reason drone warfare is even necessary is that America turned itself into a soft target, by order of the government. Rescind that order. Let us harden ourselves, so that if we must be targets, we need not be victims. An armed target is a hard target. And let us remember that drone warfare knows no bounds. Rome laid aside its tradition of making sure large bodies of troops stayed out of the city. Then the Republic became an Empire. Similarly, drone warfare could come to American soil. Unless the American people repudiate that memorandum and anything that pretends to make it legitimate.