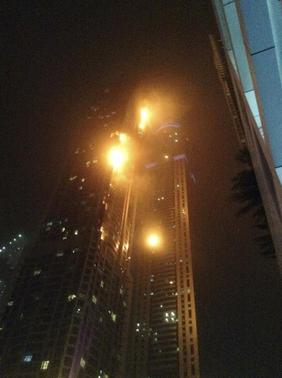 Hundreds of people in Dubai were evacuated from one of the world’s tallest residential buildings on Saturday when fire swept through The Torch, a 79-story skyscraper, residents said.

Dubai’s police chief, General Khamis Mattar, said the fire appeared to be the result of an accident and did not suspect it was caused by any deliberate criminal act, in comments carried by state news agency WAM.

He added that an investigation had started to determine the cause of the blaze, WAM reported.

A witness said flames shot out from two sides of the building as glass and metal rained down from near the summit of the structure, which stands more than 330 meters (1,082 feet) tall.

Residents said the fire had been fanned by high winds, dislodging chunks of metal and glass onto the area below, including a nearby road more than 100 meters (330 feet) away.

Traffic in the area was diverted and residents of two other nearby buildings in the emirate’s Marina district, home to thousands of expatriate professionals, were also evacuated, the witness said.

Many of those standing outside the building were dressed in pyjamas, with others in evening dress as they returned from the city’s many bars and restaurants on a weekend.

One woman, who did not give her name, stood on the street crying, saying she had rushed back fearing for her belongings after a friend contacted her about the fire. The lower floors where she lived were not affected.

Residents of neighboring towers were returning to their homes around 4:30 a.m., but residents of The Torch were told they would not be allowed back into the building until the fire officials gave approval later on Saturday.

Residents of upper floors that were most affected were told it would be days before they could return.

Dubai is one of seven emirates that make up the United Arab Emirates (UAE), a Gulf Arab trade and investment hub.

5 thoughts on “Hundreds evacuated after fire at Dubai skyscraper”