February 1, 2013 – INDIA – Hailstones the size of boulders have rained down on villages in southern India. At least nine people were killed when the violent weather hit several villages in the state of Andhra Pradesh.

The hailstorm which lasted for almost 20 minutes, destroyed crops, houses and live stock, causing devastating financial implications for residents. It was once-in-lifetime experience for people living in seven villages in Chevella, Moinabad and Shankarpally. The hailstones started falling from the sky on Tuesday night and covered the entire villages under the snow-like blanket.

Some women were seen attempting to sweep up the massive boulders using flimsy brushes more suited to lighter debris. Dr K. Sitarama, director, Meteorological Centre Hyderabad, said: ‘The hailstorm was caused by an intense thunderstorm. ‘Such occurances are highly localized and restricted to a small area.’ The storm in the south was extremely rare as the deadliest hailstorms, and perhaps the largest hailstones, in the world occur on the Deccan Plateau of northern India and in Bangladesh. –Daily Mail 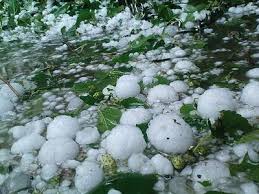 Scientists mystified by India phenomena: Two days after a severe hailstorm lashed parts of Chevella mandal in Rangareddy district, a two-member team of meteorologists from the Indian Meteorology Department ( IMD) visited the affected areas, but were clueless as to what caused the unusual phenomena and were only able to give textbook answers.

Sudhakar Rao, director of the meteorological department, said humidity incursion in the lower layers of atmosphere and colder air incursion in the upper air led to a severe thunderstorm associated with hail in parts of Chevella mandal on Wednesday.

Rao, who visited the area, said that the hailstorm was confined to a small area. “While most of the ice chunks had melted away, some was still there,” he said, describing the incident as a rare phenomenon for this time of the year. But some environmentalists said the Met department should have probably answered why it occurred at Chevella and not in any other place in the state, for instance, Guntur had experienced massive hailstorm a few years back. But B V Subba Rao, a climate change expert, said that the incident clearly indicated drastic changes in local weather conditions.

“By saying that high atmospheric moisture in the lower layers and cold winds in the upper air led to the hailstorm, officials are giving textbook explanations. They are unable to give a concrete reason,” said Subba Rao.

He further said that typical snow flake formation was noticed at Chevella which indicates that the precipitation pattern has changed. “This calls for a very close and intensive monitoring of weather changes but the Met department in India is not equipped to study these changes,” said Rao.

Weathermen had forecast rain or thunder showers for Telangana districts for January 29 but had failed to forecast the unusual hailstorm. The hailstorm hit Mudimyal, Rabulapally, Malkapur, Kummera, Gollapally, Yankapally and Kammeta villages in the mandal. It damaged crops and killed livestock.

Parts of these affected areas were left in one-foot thick sheet of ice. “Hailstones pelted down on my farms for almost an hour. Almost all the trees were left shorn of leaves. Exposed heavy duty plastic pipes were shattered. Thick leaves of agave plants were shredded,” said Raj Kumar, a resident of Kummera. Officials said that hailstorm normally occurs during summer months but not in January.

Last summer, there were hailstorms in Warangal, Guntur, Mahbubnagar and parts of Rangareddy, said M Narasimha Rao, assistant meteorologist, Met department. When asked if the hailstorm of such a scale as the one witnessed on Wednesday ever occurred, Rao said that there was no record and did not rule out such a possibility.

However, Dr Sagar Dhara, an environmental engineer, said that he had encountered a severe hailstorm in Guntur district during the 1960s-70s. “I witnessed bad hailstorms in Delhi during the 1980′s and even in Guntur district during the 1960s and 1970s. In the 1980s I was in a car in Delhi and there was a hailstorm pelting down huge chunks of ice and I thought my vehicle glass would be shattered. These hailstorms were much similar to the one in Chevella,” said Dr Dhara. He further said that one incident by itself was not indicative of climate change. –Times of India