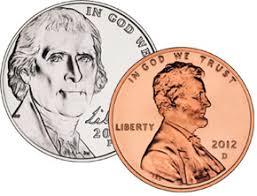 Reader Joe K. sent this news link: Bill Seeks Steel Cents, Nickels, Dimes, and Quarters. Note that the bill’s main sponsors are from Ohio, which is a steel manufacturing state. But this legislation is more than just grandstanding.

Unlike similar legislation in previous sessions of congress, this new bill will probably gain traction in the current congress, since the government has now been losing money with the seigniorage costs of pennies and nickels for many years. Well, I’ve been warning you since 2009, folks.

While this bill is still in committee, I suspect that a coinage composition change will take place before the end of 2013. The ravages of inflation made the change inevitable. The Coinflation web site presently lists the scrap value of the base metal content of the current U.S. zinc penny at $0.021192 (211.92% of face value) and the cupronickel five cent piece at $0.045671 (91.34% of face value), and their actual minting and distribution costs are actually much higher. According to Coin Update, it cost the US Mint $0.1009 to produce and distribute each nickel, as of fiscal year 2013. They can’t go on spending 10 cents producing each five cent coin much longer.

You gave been warned. I strongly urge you to go to your local bank or credit union and ask them to order you some $200 U.S. Mint Boxes of nickels. In just a few years, after the debasement is completed and the rational self interest of Gresham’s Law psychology purges all of the real cupronickel nickels from circulation, rolls ofpre-2013 nickels will sell at a substantial premium. Because nickel is a base metal, this premium will never be as high as that for silver coins, but at least you’ll know that you possess some genuine money that will hold its value, even if the Quantitative Easing monetization process continues indefinitely. (Quantitative Easing is debasement of the dollar, writ large.)

In addition to hedging against gradual inflation, holding nickels will also provide you insurance against the less likely sudden revaluation of the Dollar. As I’ve explained previously, if a zero is ever lopped off the Dollar, new paper currency will be issued, but the old coinage will probably still circulate. (Since it would be too expensive to replace.) This will make anyone holding coins the beneficiaries of an overnight 10X gain.

This may be your last chance to stock up on nickels at face value, and without any sorting, folks! If you don’t already have four or five .30 caliber ammo cans full of rolls of nickels, then you are behind the power curve. Don’t dawdle any longer. – J.W.R.