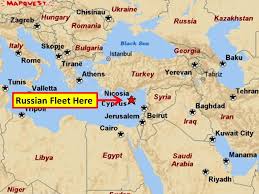 A few days when reporting that the Russian Pacific fleet had crossed the Suez canal for the first time in decades in order to form a Mediterranean task force parked in Cyprus for obvious symbolic reasons (in close proximity to Syria and the Israel-parked Kearsarge), some observed that while the submarine support was adequate, the actual warship fleet designated to support any potential escalation in Syria would be largely insufficient.

Perhaps the Russian Navy heard these complaints, and several hours ago RIA reported that two extra warships from the Russian Black Sea fleet had joined the Mediterranean task force, citing Capt. First Rank Vyacheslav Trukhachyov, has said. None of these recent deployment should come as a surprise: in March Russian Defense Minister Sergei Shoigu said a permanent naval task force in the Mediterranean was needed to defend Russia’s interests in the region. Read Syria, Cyrpus (where the task force will be on anchor indefinitely), and, of course, any and all western offensive involving Iran. And slowly but surely said task force is nearing completion.

“During a planned rotation, large landing ships Nikolai Filchenkov and Azov from Russia’s Black Sea Fleet have started performing their tasks in the Mediterranean,” Trukhachyov said.

The two ships in question:

The two ships will be added to a fleet that is becoming increasingly imposing in both numbers and capability: the task force currently includes vessels from the Pacific, Northern, Baltic and Black Sea fleets: the Admiral Panteleyev and Severomorsk destroyers, the Yaroslav Mudry frigate, the Peresvet and Admiral Nevelskoi amphibious warfare ships, the Fotiy Krylov, Altai and SB-921 salvage/rescue tugs, the PM-138 repair ship, the Pechenga, Lena and Dubna tankers. The task force may be enlarged to include nuclear submarines.

Admiral Vladimir Komoyedov, head of the parliamentary defense committee, previously told RIA Novosti that the Mediterranean task force should be comprised of 10 warships and support vessels as part of several tactical groups tasked with attack, antisubmarine warfare and minesweeping.

In other words, check to you America, we are ready.

And speaking of checking, just a month earlier it was the US that was deploying its own naval support in the area with the LHD-3 Kearsarge crossing the Suez canal, and now on anchor in Israel. Here is a 60 second timelapse video of what it looks like when a US naval ship cross the Suez Canal, direction escalation.