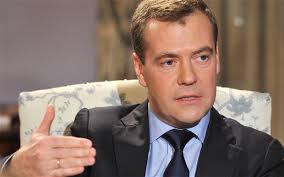 Interesting interview by Medvedev today who admitted that most Russian government agencies use Cyprus for it’s financial transactions.

-How corrupt does a country have to be for its government agencies to use a tax haven for financial transactions?

-The EU/Germany are certainly aware that 95% of all Russian money goes through the Cypriot banks. Certainly they were well aware of the consequences this would lead to. Is this the first salvo in the new world war??

In comments released early Thursday, Medvedev warned that Russia would take a “firm” stand on Cyprus because the accounts of governmment structures had been blocked on the island.

So far the market has been largely oblivious of the shattered trust and changed dynamic in European banking dynamics for one simple reason: Cyprus banks have been closed, and likely will be closed indefinitely, preventing the mass media from broadcasting what happens when an entire population, and foreign depositors, decide to clear out the holdings of their bank accounts, either physically or electronically, and the public anger the will result when they find that courtesy of fractional reserve banking, only a tiny amount of said deposits is actually present. In the meantime, retail depositors have had their withdrawals limited through a form of capital controls, allowing them to pull only as much as the daily limit is on given ATMs. So far the banks have had enough cash to keep ATMs stocked up to the daily required minimum, but that may soon be ending. BBC’s Mark Lowen, in Nicosia, reports that “Cyprus’ banks are still giving out cash through machines – although with limits, and some are running low.” Ironically, as physical cash becomes ever scarcer, merchants are now clamping down on electronic payments unsure if they will ever be able to convert electronic euros into actual ones: “Some businesses are now refusing credit card payments, our correspondent reports.”

Pictures From A Cyprus ATM Line

“Markets believe that we will find a solution and that we will provide more money and this might not be the case.”