Following a wave of terrorist attacks in late June in France, Tunisia, and Kuwait, the narrative that ISIS is on the march has been dusted off by Western governments and media – though that particular fairy tale has never been allowed to collect dust for very long.

While it’s entirely unclear what, if any, ties the alleged perpetrators of the aforementioned attacks had with ISIS fighters based in Iraq and Syria, the media ran with the tale of ISIS expansion, and Americans spent another July 4th threatened by their national security establishment with jihadists planning to attack their summer barbecue and pool parties. (Naturally, nothing happened.) 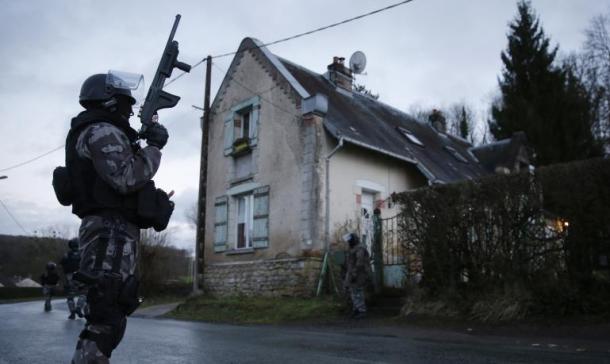 ‘Terror Games’ – The Charlie Hebdo magazine shooters were well-known to security prior to the attacks observed in France. (Photo link pipr.co.uk)

The suspect in France was already known to the DST, French domestic intelligence, and the individual he beheaded was his employer, with whom he apparently had a hostile relationship. But the fact he had some nominal relationships with other Islamic radicals was enough to depict the murder of his boss as an ISIS-connected attack.

Last year in the American state of Oklahoma, a black Muslim prison convert with sympathies for radical Islam beheaded a co-worker at the meat-packing plant from which he had been fired. The media toyed with the notion that the beheading might have been ISIS-inspired or an act of “lone-wolf” terrorism, but quickly moved on to other items. The similar event in France has now established that disgruntled workers of a radical Islamic persuasion who seek violent revenge on employers or coworkers can now officially be cast as nefarious foot soldiers of ISIS. (Apparently any resentful office gnome that fantasizes about taking out his boss is a potential ISIS recruit.)

Meanwhile, in Tunisia a young jihadist (with possible accomplices) infiltrated a beach frequented by foreign terrorists and murdered almost 40 people. Tunisian authorities had been warned the month before that a terrorist attack in that area was likely, but apparently did next to nothing to prevent the attack.

The Tunisian suspect was allegedly trained by a jihadist faction in neighboring Libya.[1] Western powers – Britain, France, and the United States – deliberately destabilized Libya and armed jihadist brigades there, a fact continuously glossed over by the politicians and media, and now they demand action be taken in the wake of the Tunisian beach massacre.

The violent NATO intervention in Libya in 2011 and subsequent overthrow of Muammar Qaddafi has led to a significant proliferation of terrorism across North and Central Africa, with waves of Africans fleeing across the Mediterranean to Europe to escape the civil and sectarian strife unleashed in their countries. Yet none of the Western leaders who ignited the crisis have been held to account. Indeed, those who wrecked Libya, and Syria, along with unleashing ISIS upon the Middle East, have done quite well for themselves.

In this vein, after the recent shooting at a black church in Charleston, South Carolina, allegedly by a mentally imbalanced white supremacist, former Secretary of State and current presidential candidate Hillary Clinton came out to decry gun violence and call for further gun control.

The hypocrisy of her stance was completely ignored by the establishment media, which allowed her to self-righteously pontificate, never calling her out over her policy of Secretary of State of arming vicious jihadists in Libya and Syria. It should be further remembered that while Clinton feigned moral outrage over Charleston, she cackled with joy over the vicious torture and murderof former Libyan leader Muammar Qaddafi by her pet Libyan mujahideen.

But of course Hillary can laugh, because she knows that the population that she aspires to soon rule doesn’t have the slightest clue about her role in helping generate the synthetic terrorism of ISIS, which has been a boon to the national security establishment and surveillance societies in North America and Western Europe. The threat posed by elusive ISIS, allegedly present in all 50 American states and across the border in Mexico, is enough to keep American television consumers perpetually on edge. The bizarre events in Garland, Texas and further sectarian tensions have only served to maintain this elite-induced heightened state of paranoia.

One of these is a Hollywood B-movie production. The other is Iron Man.

Add on top of this an unending flow of slick, high quality ISIS videos allegedly showing beheadings, mass executions, and other nasty items. These conveniently timed and well-produced videos, eerily similar to plot elements of the popular Iron Man movies, as some commentators have pointed out, have helped serve the agenda of manufactured consent that “something must be done.” With the American presidential election cycle coming into full swing, we should expect more of the same, as recently observed by 21st Century Wire columnistShawn Helton:

“As the US election cycle heats up over the next year, the psychological warfare regularly used to deceive the public will also increase.”

The public mind is not able to think beyond the dualistic and cartoonish notions that it has been fed by the mass media. Shadowy terrorists, be it ISIS or Cobra Command, are out to destroy our freedoms and way of life, which nowadays consists of little more than waving rainbow flags as one plays Candy Crush on an iPhone at the local Starbucks, and it’s up to G.I. Joe and the military-industrial complex to save the day.

That G.I. Joe runs and funds Cobra Command never occurs to them; they’ll just vote for Hillary or another globalist sock puppet, deluding themselves that she’ll make everything better. Although a growing number of people have adopted a jaded and dismissive attitude in response to the ceaseless flow of terror propaganda, they sadly remain a minority.

Synthetic terrorism and the endless media spectacle that surrounds it is a necessary and essential component of the control grid that the Atlanticist oligarchs need to maintain hegemony over the societies they own. Just as well, it serves as a pretext to subvert any remaining states and cultures that dare defy them.

The totalitarian nature of the liberal globalist order demands such actions, as the Russian philosopher Alexander Dugin correctly noted:

“… liberalism is a totalitarian and violent ideology, a means to direct and indirect political repression, to educational pressure and ferocious propaganda, self-proclaiming to be non-totalitarian, that is, concealing its very nature. This is a scientific fact. [Liberal] totalitarianism is entirely coherent with the whole perspective of its political concept.”

McBabylon needs an enemy as its excuse for world conquest, and while geopolitical opponents like Russia can certainly be cast in that role, in order to make the fear more close to home, sometimes the enemy has to be constructed and stage managed for the proper effect.

[1] Another interesting item relating to the Tunisian attack is the presence of Cal Sarwar, a self-styled terrorism expert, at a hotel near the site of the massacre. Mr. Sarwar had previously gained some attention after claiming to have infiltrated the Taliban, though on whose behalf he acted, we don’t know.

Author Daniel Spaulding earned a BA in English literature from Bridgewater State University. He currently works and lives in Seoul, South Korea. He enjoys reading philosophy, history, politics, and science fiction. This article was originally published at Soul of the East.

2 thoughts on “SYNTHETIC TERROR SPECTACLE: Deconstructing the Nature of ISIS”