The criminalization of political dissent in America 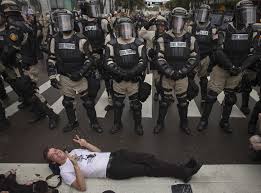 In a series of prosecutions, precedents are being established for the criminalization of political dissent in America.

Last week, Massachusetts high school student Cameron D’Ambrosio was arrested and charged under “terrorism” laws merely for posting lyrics on Facebook that make reference to the Boston Marathon bombings. He faces 20 years in prison. A string of similar “terror” prosecutions around the country take aim at the First Amendment protection of free speech and political expression.

As with freedom of speech, freedom of assembly, also guaranteed under the First Amendment, has not been officially repealed. The reality, however, is that political assembly is already a semi-criminal activity in America. Political protests are routinely met with vastly disproportionate police mobilizations, confinement to oxymoronic “free speech zones,” “kettling” (in which protesters are surrounded and forcibly moved in one direction or prevented from leaving an area), beatings, tear gas, pepper spray, stun grenades or rubber bullets. The standard government response to a political protest is a massive show of force, complete with police snipers on rooftops.

The drive towards the establishment of an American police state, initiated under the Bush administration, has shifted into high gear under Obama. For nearly twelve years, the phony “war on terror” has been used as the overarching pretext for illegal imperialist war abroad and a methodical assault on democratic rights at home. The basic structure of authoritarian rule is now emerging into plain view.

Over the recent period, the government has vastly expanded its warrantless surveillance of the population. The Obama administration has constructed a massive data center in Utah big enough to store the contents of every personal computer in the country. Already at a government agent’s fingertips–without a warrant–are all of a person’s Internet browsing activity, telephone conversations, text messages, credit card transactions, mobile phone GPS location data, travel itineraries, Skype and Facebook data, medical records, criminal records, financial records and surveillance camera footage.

2 thoughts on “The criminalization of political dissent in America”