The Small Arms Treaty vs. the U.S. Constitution

Despite the current great worry about the Small Arms Treaty being able to prohibit American citizens from owning firearms, there exist two, even greater worries:

(1) The ignorant status of many people in not realizing what tragedy will to occur to their freedom and liberty if we allow a National Gun Registry to be created. The Small Arms Treaty initiates such a registry. It also unlocks the door for the communist-led United Nations to enter into our Bill of Rights, and tamper with all other basic natural rights.

(2) The people’s lack of knowledge that no part of the Bill of Rights itself is subject to the repeal, revocation or rescinding process. Natural rights are not subject to these processes, because they are God-given rights and thus unalienable.        The Second Article in the Bill of Rights was meant to give the people an option against tyranny from within and invasion from without. It was meant to prevent the enactment of disastrous and ruinous laws and treaties.

Read that sentence carefully! Many people do not understand that any law being made must not conflict with the Bill of Rights of the United States Constitution. Under THIS Constitution, our laws and treaties are acceptable only if they conform to the intent and purpose of what has been written in this master document. No law is acceptable if it conflicts with or alters the original text. THIS Constitution, and not the opposing United Nations Charter, is the supreme law of this country. In these times, however, evil laws and treaties have been written and designed to work against those previously established laws, which were supposed to prevent tyranny from happening.

No foreign country nor organization (such as the United Nations) has the power to alter, override, supersede, revoke, rescind or block the fundamental principles or the primary directives laid down within these precious documents: The Bill of Rights and the U.S. Constitution.

For instance, the Bill of Rights requires the people to be armed (for their own safety and for the protection of their country and its principles). The Constitution requires government officials to provide the people with a common defense (an army, navy, etc.). All treaties made (prior) or which shall be made, under the authority of the United States are also to be the supreme law of the land PROVIDED that every treaty is “in pursuance of” (in conformity to) true law and right reason – and those principles enshrined in the 1789 Constitution that put limits on the power of government.

Our laws are required to promote the pursuance of liberty, justice, independence, true freedom and sovereignty. Note that the 1789 Constitution, when speaking of itself, refers to its own self as “THIS Constitution,” eliminating any doubt or argument as to its authority, supremacy, intention, or reasons for checks and balances. Treaties can only be lawful if written in accord to “THIS Constitution”.

Neither the United Nations nor any U.S. public official has the authority to require compliance or enactment of such an intolerable treaty such as the U.N.’s Small Arms Treaty. The Small Arms Treaty must be stopped! It intends to delude, deceive, and destroy the American form of government, because without firearms there is no force to maintain a government “of the people” — “by the people” – “and for the people”; nor to defend any of the other rights and principles listed in the Bill of Rights. 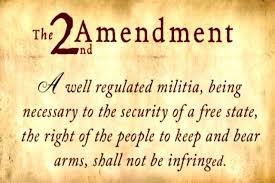 “THIS Constitution’s” Second Amendment is the bulwark which undergirds our fundamental republican form of government, that is guaranteed to the people of the United States (refer to United States Constitution — Article IV, Section 4).

The principles within “THIS Constitution” were designed to protect and safeguard the people against sedition and tyranny in government. Did you know that a (so-called) law1 has been passed by Congress ordering our entire military (all branches of the United States armed forces and equipment) to be permanently given away to the communist-dominated United Nations to be made a part of the U.N.’s world army? Can you picture your future whenever the United Nations army is rendered fully armed while U.S. citizens are rendered completely disarmed? The objective of the Small Arms Treaty is to begin the process of disarming the entire American population, while foreign United Nations soldiers are authorized to police the U.S.A. under the up-coming United Nations “world army”.

supersedes the Constitution, and it can cut clear across the Bill of Rights”! This is not true! This false doctrine has been taught in institutions of (supposedly) higher learning.   Check your Constitution and read Article VI clearly. All treaties must be made in pursuance to “THIS Constitution”.

Repeat: No law or treaty can be valid if it is contrary to the principles listed in “THIS Constitution”. It is important for the people to understand the criteria under which all treaties must meet and be subjected to before any treaty can qualify as being valid and ‘supreme law of the United States’. Unfortunately, the United Nations Charter itself was undeservingly ratified as a “treaty”, which is at the core of the problems we are facing today.

Be informed and spread the word to others of the true meaning of the treaty clause. It does not allow anyone the right to disregard or overthrow the essential elements and principles within our Constitutional system of government. Public officials have no authority to prohibit private ownership of firearms. The security of the United States has a need for an armed nation. The best solution to stop this problem is to withdraw the United States from membership in, and from funding, the communist United Nations.

The people need to immediately embark upon a wide-spread campaign and get the word around about the disaster that will befall our country if the United Nations’ Small Arms Treaty should ever be okayed and accepted by the president and the senate.

The world government the United Nations has built will not permit representative government to exist (i.e. representatives chosen by the people in public elections), because it necessitates being run by military management. World government cannot be operated in any other way. Another of its policies is that there can be no individual or private ownership of land.

If we are disarmed, how will we be able to stop these communist goals from being applied to and against the people of our own country? Oppose the Small Arms Treaty! Stop it now before it is signed by the president! Remember: Eternal␣vigilance␣is␣the␣price␣of␣liberty!␣␣␣␣

“The condition upon which God hath given liberty to man is eternal vigilance; which condition if he break, servitude is at once the consequence of his crime, and the punishment of his guilt.”        John Philpott Curran

P.S. Considering the fact that the U.N. Charter never qualified as a “Treaty”, it could be easy to “get out of the U.N.” – simply by public demand and use of Rebus Sic Stantibus.

One thought on “The Small Arms Treaty vs. the U.S. Constitution”