Trump and other leaders clash on trade, climate at G7

Leaders from the world’s major industrialized nations began talks on Friday at a G7 summit in Sicily which is expected to expose deep divisions with U.S. President Donald Trump over trade and climate change.

The two-day summit, at a cliff-top hotel overlooking the Mediterranean, began a day after Trump blasted NATO allies for spending too little on defense and described Germany’s trade surplus as “very bad” in a meeting with EU officials in Brussels.

After receiving warm receptions in Saudi Arabia and Israel, Trump’s confrontational stance with long-standing partners in Europe cast a cloud over the meeting in Taormina, where leaders are due to discuss terrorism, Syria, North Korea and the global economy.

“No doubt, this will be the most challenging G7 summit in years,” Donald Tusk, a former Polish prime minister who chairs summits of European Union leaders, said before the meeting.

Trump was elected in November after a campaign in which he rejected many of the tenets that the Group of Seven has stood for, including free trade, multilateralism and the liberal democratic values.

European leaders, including German Chancellor Angela Merkel and new French President Emmanuel Macron, had hoped to use the summit to convince Trump to soften some of his stances.

But diplomats conceded as the talks began that the United States was unlikely to budge, meaning the final communique could be watered down significantly compared to the one the G7 unveiled at its last summit in Japan.

The summit kicked off with a ceremony at an ancient Greek theater overlooking the sea, where war ships patrolled the sparkling blue waters. Nine fighter jets soared into the sky above Taormina, leaving a trail of smoke in the red-white-green colors of the Italian flag.

The leaders then adjourned to the San Domenico Palace, a one-time Dominican monastery that is now a luxury 5-star hotel. During World War Two, it housed Nazi air force chiefs. 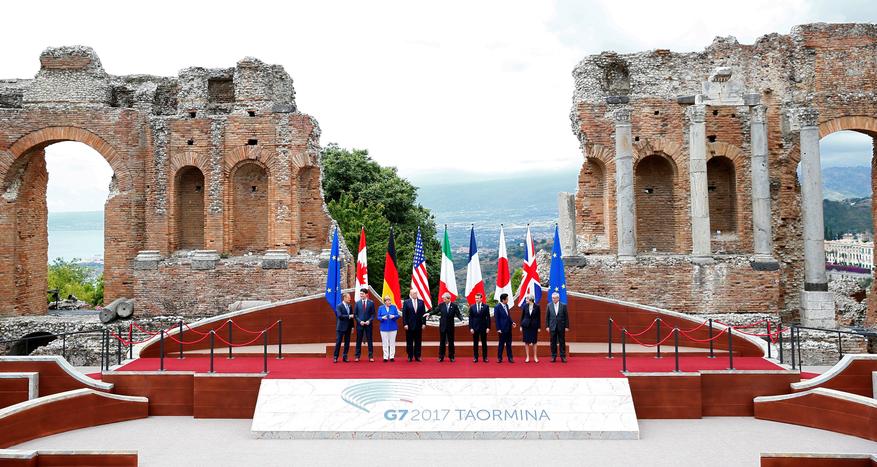 Italy chose to stage the summit in Sicily to draw attention to Africa, which is 140 miles (225 km) from the island at its closest point across the Mediterranean.

More than half a million migrants, most from sub-Saharan Africa, have reached Italy by boat since 2014, taking advantage of the chaos in Libya to launch their perilous crossings.

But trade and climate, to be discussed on Friday afternoon, are the most contentious issues.

Trump, who dismissed human-made global warming as a “hoax” during his election campaign, is threatening to pull the United States out of a 2015 climate deal clinched in Paris in 2015.

Fellow G7 leaders are trying to convince him to stay in. Cohn and other administration officials have said Trump will wait until after the summit to decide.

“This is the first real opportunity that the international community has to force the American administration to begin to show its hand, particularly on environment policy,” said Tristen Naylor, a lecturer on development at the University of Oxford and deputy director of the G20 Research Group.

On Thursday in Brussels, with NATO leaders standing alongside him, Trump accused members of the military alliance of owing “massive amounts of money” to the United States and NATO – even though allied contributions are voluntary.

The remarks went down badly with European leaders, who had hoped Trump would use the opportunity to confirm his commitment to Article 5, the core NATO principle that an attack on one member is viewed as an attack on all.

“When an American president cannot commit clearly to Article 5 at a time when everyone is expecting him to do this then there is the risk that Moscow interprets this as meaning it is no longer valid,” said Jan Techau of the American Academy in Berlin.

In a private meeting with European Commission President Jean-Claude Juncker, Trump also denounced the German trade surplus as “very bad” and complained about the large number of German cars being sold in the United States, officials said.

Juncker tried to play down the comments ahead of the summit. But they underscored ongoing policy divisions between Trump and his partners four months after he took office.

Trump is attending his first major international summit but is not the only G7 newcomer. Macron, Italian Prime Minister Paolo Gentiloni and British Prime Minister Theresa May will also be attending the elite club for the first time.

May is expected to leave a day early, following Monday’s suicide bombing at a concert in northern England that killed 22 people carried out by a suspected Islamist militant of Libyan descent who grew up in Britain.

G7 leaders were expected to issue a separate statement on terrorism on Friday, before issuing their formal communique on Saturday. Italian officials have suggested the final communique will be shorter than 10 pages. At the last G7 summit in Japan it totaled 32 pages.

One country that will not be present is Russia. It was expelled from the group in 2014 following its annexation of Crimea from Ukraine.

Trump called for improved ties with Moscow during his election campaign.

But accusations from U.S. intelligence agencies that Russia intervened in the U.S. election to help Trump, and investigations into his campaign’s contacts with Russian officials, have hung over his four-month-old presidency and prevented him from getting too close to Moscow.

On Thursday, the Washington Post and NBC News reported that Trump’s son-in-law and adviser Jared Kushner was under scrutiny by the FBI because of his meetings with Russian officials before Trump took office. One of Kushner’s attorneys said her client would cooperate with the investigation.

Kushner and his wife, Trump’s daughter Ivanka, have returned to Washington after accompanying the president for the first part of his first foreign tour.

One thought on “Trump and other leaders clash on trade, climate at G7”