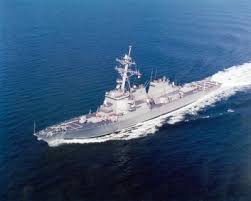 The U.S. Navy is shifting a guided-missile destroyer in the Pacific to waters off the Korean peninsula in the wake of ongoing rhetoric from North Korea, U.S. defense officials said.

The USS McCain is capable of intercepting and destroying a missile, should North Korea decide to fire one off, the officials said.

Still, U.S. defense officials insist that there is nothing to indicate that North Korea is on the verge of another launch.

The White House on Monday said the United States hasn’t seen large-scale movements from North Korean military forces in the aftermath of harsh rhetoric from the reclusive government.

“I would note that despite the harsh rhetoric we are hearing from Pyongyang, we are not seeing changes to the North Korean military posture, such as large-scale mobilizations and positioning of forces,” Carney said

The McCain in December 2012 was moved to be in position to defend against a impending North Korean rocket launch.

On Sunday, The United States sent F-22 stealth fighter jets to South Korea as part of military exercises in a move aimed at further deterring threats from North Korea against its neighbor.

It was unclear if the McCain was also part of the ongoing military drills.

It was earlier reported that the USS Fitzgerald, another guided missile destroyer, would be moved to the area, though it was only among the ships under consideration for the deployment.

Also Monday, South Korean President Park Geun-hye appeared to give her country’s military permission to strike back at any attack from the North without further word from Seoul, saying she took the North’s escalating threats “very seriously,” South Korean news agency Yonhap reported.

“As commander-in-chief of the armed forces, I will trust the military’s judgment on abrupt and surprise provocations by North Korea,” she said, according to Yonhap.

The deployments and Park’s remarks came as tensions approached an all-time high between Pyongyang and Washington.

Kim Jong Un has ratcheted up the rhetoric against both South Korea and the United States in recent months, and in February violated U.N. sanctions by ordering a nuclear weapons test.

On Saturday, North Korea said it had entered a “state of war” against South Korea, according to a statement reported by the North’s official news agency, KCNA.

In an interview on CNBC Monday, former Defense Secretary Leon Panetta said the United States needs to be “very concerned” by North Korea’s recent weapons test and “level of bellicosity” and do everything necessary to defend U.S. allies and interests.

Panetta said while Kim Jung Un’s actions appear aimed at his internal situation the U.S. should “take nothing for granted” and be prepared.  The greatest danger right now, he said, appears to be the possibility of a miscalculation.

“The reality is we don’t have as much insight as we should,” Panetta said of Kim’s motives.

The stealth aircraft – two F-22 Raptors — were deployed from Japan to the Osan Air Base in South Korea from Japan where they will remain on “static display” as part of the military drills, Pentagon spokesman George Little said. The F-22s are not expected to actively participate in any exercises, however.

This is the fifth time F-22s have deployed to South Korea. Exercise Foal Eagle began on March 1 and will continue until the end of April.

Kim has also recently threatened to “settle accounts” with the U.S. and posed near a chart that appeared to detail bombings of American cities.

The F-22 jets’ arrival follows other recent displays of air power by the U.S. in South Korea. Last week B-52 bombers and B-2 stealth bombers were sent to the country for the annual exercise.

In North Korea, meanwhile, KCNA reported on an Easter service at which it said “the participants renewed the firm resolution to put the warmongers [the US and South Korea] into the red hot iron-pot of hell as early as possible.”

North Korea’s stance, however, can be notoriously difficult to interpret.

In a later release Monday on KCNA, Pyongyang announced the adoption of a law “consolidating” its position as a nuclear power that would use its weapons only “to repel invasion or attack from a hostile nuclear weapons state and make retaliatory strikes.”

Among the law’s pledges were that North Korea would store its weapons responsibly, that it would not use them against non-nuclear nations, and that it would participate in nonproliferation talks — though the last clause came with the condition that there was “improvement of relations with hostile nuclear weapons states.”