Who is the Number One Terror Organization on Planet Earth? 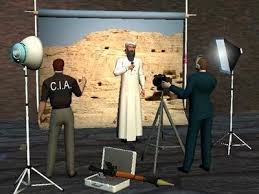 Al Qaeda rebels have taken Fallujah and John McCain, the US Czar for the industrial war complex is saying, “I told you so.”  These globalist mafia truly do believe we American nationals to be devoid of the ability for critical thinking.  McCain is saying that the US pullout from Iraq was a mistake and now the terrorists Al Qaeda are taking over.

And then in other Zionist controlled reports, we have the war mongers talking about Al Qaeda destabilizing the Middle East.  They bring a map up on the screen, highlighting Afghanistan, Iraq, Libya, and Syria.

Afghanistan enjoyed relative stability and the Taliban there, whom we backed as the Musha Hadeen against the Russian invasion of the seventies, had brought opium production pretty much to a stop.  I have to believe they are glad we invaded as does their neighbor to the south, Pakistan.  I’m sure they love the terror from the sky and all the family get-togethers they enjoy at the funerals, that is if the funeral isn’t bombed.

Is not blowing innocent people up to achieve political objectives the very definition of terrorism?

Libya: seems to me those people were doing quite well and prospering until they decided to move their wealth into gold and BP discovered a huge oil reserve off the coast of Tripoli.  And then they needed to be liberated and so the US, at the direction of Zion, hired Al Qaeda mercenaries to invade and when the Libyan forces stood up to put down the invasion, the United States, as a part of the Zionist controlled NATO, sent in an international air force to bomb the Libyan people into submission and accomplish a regime change.  All of course in violation of international and US law.

So, wanton criminals blowing innocent people up, using weapons of mass destruction for political gain in the form of resource acquisition: is this not the very definition of international terrorism?

And how about Iraq, the most modern and secular Middle East nation to ever exist, that is until the Israeli Zionist controlled US military invaded them.  Don’t get me wrong, Saddam Hussein was a low life murdering criminal, as evidenced by the fact that he, like Osama Bin Laden and Manuel Noriega, had been CIA assets receiving checks directly from the American taxpayers for at least thirty years before they were converted into ‘the enemy’.

I’m just going to go ahead and say it.  Is there anybody out there who believes that the Iraqi people benefited in any way from what the Zionist led US military did to them?  Years of starvation through sanctions and then an all out genocide complete with weapons of mass destruction.

Blowing up people with weapons of mass destruction in order to achieve international political gain, is this not the definition of terrorism?

Remember, the Iraqis had no weapons of mass destruction on their soil until US warplanes put them there in the form of exploded ordinance.  The attack on the Iraqi people was completely unwarranted and now their once stable and prosperous country is reduced to a third world hell hole with daily terrorist bombings and now John McCain says, “We should return to Iraq to fight Al Qaeda”, the same Al Qaeda we have hired as mercenaries to kill Christians in Syria at the bidding of our masters in Tel Aviv.

Hiring mercenary armies to destabilize legitimate governments through murder, is this not the definition of terrorism?

God help us to end this madness before it is too late.

5 thoughts on “Who is the Number One Terror Organization on Planet Earth?”