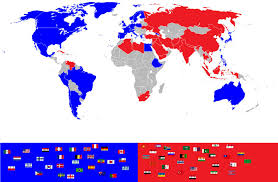 The question is continually being presented as to when World War III will begin and when the United States will join in on the bloodletting frenzy.  Technically the war has already begun and the United States is already engaged on three fronts.

Invasion into a sovereign country, contrary to popular propaganda, is an act of war; thusly the US invasion forces in Mali are engaged in war in Africa.

On March 11, 2013, the North Korean Army declared the 1953 armistice between the north and south invalid, thus that war has become active again and now continues.  The United States, under defense treaty with South Korea, is an active participant and so we have a second front in this world war.

On October 3, 2012, Syria fires mortars into Turkey.  Turkey returns fire.  This incident was no doubt perpetrated by agents of the CIA and Mossad, but none the less, it represents an act of war.  As the United States has a mutual defense treaty with Turkey, again, the United States is at war.

On January 30, 2013, an Israeli jet crossed into Syria and dropped bombs, ending the 1967 Cease Fire after the 7 Days of Zionist Conquest.  Again, the United States has defense treaties with the Zionists and again, we are at war.

Also, do not forget the active fronts in Iraq, Afghanistan, and Pakistan.

The only conclusion one can come out of this with is that World War III is already well under way and we are but one false flag away from an escalation into insanity as North Korea threatens to attack the US with nuclear bombs.  It would seem that we are being casually pushed into a horrific conflict that none of the peoples who are marked for death have any interest in participating in.  But hasn’t that always been the way?  Governments perpetrate the wars and the people do the fighting and dying, never knowing the true reason for their demise.

God help all of the peoples of this planet to refuse to kill one another for the pathological blood lusting Zionist monsters.