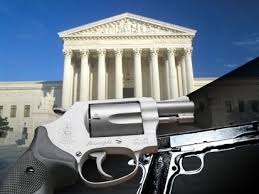 TL in Exile – by TL Davis

The one thing more humiliating than being caught by the authorities in an attempt to fight back against a corrupt and illegal system of government is to be caught not making the attempt.

There is no doubt in my mind that every single law restricting ownership of firearms is an illegal law. I can argue that case by case if needed, with a few moments to check my notes. A great resource, however, can be found here. It is an exhaustive look at the Second Amendment as related to U.S. v Miller. Most notable are the arguments made in favor of the United States. The logic and references made there are convoluted and entirely void of references to the founders who made their sentiments known time and time again on where the right rested. It rests with the individual.

Oddly, an argument made during the whole process of Miller making its way up to the Supreme Court was the argument no liberal would want to be made in defense of their attacks on the Second Amendment. The government argued that the only legitimate use of weapons in the hands of the people is to throw off oppression and tyranny of authorities. Referenced as substantiating the government’s point was Aymette v. State, supra, it was said (p. 158):

As the object for which the right to keep and bear arms is secured, is of general and public nature, to be exercised by the people in a body, for their common defense, so the arms, the right to keep which is secured, are such as are usually employed in civilized warfare, and that constitute the ordinary military equipment. If the citizens have these arms in their hands, they are prepared in the best possible manner to repel any encroachments upon their rights by those in authority. They need not, for such a purpose, the use of those weapons which are usually employed in private broils, and which are efficient only in the hands of the robber and assassin. These weapons would be useless in war.

This was the government’s argument not the argument of the defendants. By then Miller was dead and Layton chose a deal for probation. They did not even have counsel to argue for them before the Supreme Court.

It is simple, the Supreme Court wanted to find a way to keep guns out of the hands of criminals and used every means possible to interpret the Constitution in a way that would allow them to do so, even calling back on the very British government’s laws that led to the Revolutionary War.

This is why one cannot look to the Supreme Court, or any court to determine what rights a person has. No matter how clearly it is said, how eloquently it is put, they will find what they want to find and discard what does not serve their purpose of the day.

The only true arbiter of one’s rights is oneself. Though many feel the sting of oppression, they will not act. Only those who understand that rights are inherent to freedom and paid for in blood will ever be willing to shed blood for them. It is not a group or an organization that is capable of fighting for your rights, it is yourself, or no one.

If one needs proof from a court that one has a right, they have already forfeited it. For too long the people of this nation have allowed the courts to determine for them what they are allowed to do, when the opposite should be true. If the Constitution were functioning properly, with honorable and obedient servants of the people behind it, the Supreme Court would rule over and over on behalf of the individual rights of the people. As it is always the nature of government to abuse these rights, the cases should only arise from the abuse and the government should be more specifically restricted from abusing them. Since this is not the case, we can assume that the Constitution is not functioning properly to secure the rights of the people and that the servants of the people are neither honorable, nor obedient.

Over the weekend the III% held a Congress. Hardly any of the III blog sites I go to, or Second Amendment forums mentioned it at all.The III Congress met and discussed action. I support them. They are in need of delegates from as many states as they can get. I hope that it will grow and become a powerful voice in restoring the Constitution. But, I did not attend.

I have come to the understanding, finally, that this is personal. I have rights that are not being honored by the governments created to secure them. It is my obligation to demand a redress of my grievances and since the government will not respond, except to punish my temerity, I am forced to act in a way that shall be most likely to effect my liberty and my security.

I can cite case after case if I choose, point out flaw after flaw in the logic used to arrive at whatever social engineering ruling might best please five out of nine justices, but it would not make a difference. I no longer look to anyone to prove to the “authorities” that I have rights. No one is listening. The warnings have all been made time and time again by citizens wronged by the injustice of a system adrift on shifting sands.

It is what it is and one person can make a difference.

2 thoughts on “A System Adrift”