All terror attacks are psyops 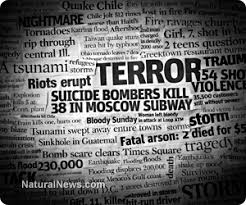 Whether the Boston Marathon murders were staged as a false flag, and if so, by whom, there are certainly contradictions in the media story line so far.

Mike Adams, at natural news, has pointed out several key absurdities in the official scenario, including the apparent controlled demolition of a bomb at the JFK library, a mile away from the explosions at the Marathon finish line.

This demolition, unreported by the press, was mentioned just before it took place, by a Boston Globe tweet: “There will be a controlled explosion opposite the library within one minute as part of bomb squad activities.”

The demolition would have taken place about an hour after the two explosions at the Marathon finish line, which means the bomb squad was able to find the Library device, rig it for demolition, and blow it up in record time.

Whatever the cause of the fire/explosion in the Library, that “incendiary device” was spent, and the bomb squad found another unexploded bomb on the premises.

A local Boston TV reporter, Eileen Curran, took a photo of the Library. The exterior of the building, at the employee’s entrance, shows blackened walls. If the “electrical fire” or the “incendiary device” caused this damage, the room in the Library where the fire or explosion took place must have been just inside the building. No media sources are specifically reporting that, which seems quite odd.

The press is merely stating there was a fire in a room in the Library. The fact that the fire was quite close to an entrance certainly rates a mention. It adds juicy media drama to the report. But there is no coverage of the fact.

All terror attacks, no matter who launches them, have a psychology. They have a purpose. Inducing fear, of course. Causing the public to give in to a new set of “security regulations,” which tighten the screws on freedom, of course. Painting some designated group as heinous, of course.

The third Monday in April, is Patriot’s Day. It commemorates the April 19, 1775, opening battles in the Revolutionary War against England, at Lexington and Concord. Previously celebrated on April 19th, it is also the anniversary of the Oklahoma City Bombing (1995), and the final FBI attack on the Waco, Texas, Branch Davidian compound that killed 76 men, women, and children (1993). April 15 is also tax day.

So some media commentators are already opining that “anti-tax-pro-patriot-anti-government” persons are behind the Boston murders.

At an elite level, where psyop research is conducted, the psychology of terror attacks involves disrupting the normal perception of reality.

Most people live their days in a more or less steady state of mind. They perform routine tasks over and over. They see their daily environment as quite familiar. All this produces what could be called a light trance.

If that seems improbable, notice what happens when something completely unexpected intrudes on habitual perception and experience. Shock is what happens.

It’s as if the person had been sleeping and suddenly and forcibly wakes up.

On a quiet residential street, a car plows into a lamp post. On a peaceful boulevard, a gust of wind blows a sign from its hinges into a store window, smashing it.

People are shocked. They look up. “Wow. Where was I?” Yes, it’s like waking from a dream.

Multiply that effect by a thousand. Bombs go off. The sounds of the explosions, the shock waves, people falling, people bleeding, grotesque injuries, death. In the space of a few seconds, and on a street where nothing ever happens.

And one layer removed from this, the world watches it unfold on television.

It’s a rip in the fabric of perceived reality. Right now.

Retired psyop planner, Ellis Medavoy (pseudonym), told me in a 2002 interview: “People think it’s very esoteric to talk about disruption in the space-time wave. But setting up certain psyops is very much about that. The theory of these operations has everything to do with the fact that people exist in an average and consistent space-time wave.

“They become used to that. They’re not even aware of it. So a psyop can go two ways. It can encourage that form of sleep, to make it continue. Or it can blow people right out of their wave into something that’s very disorienting.

“In the latter case, you’re forcing people out of their average perception of space and time, but you’re not giving them anything to replace it. They’re hanging in a void, so to speak.

“What’s the result? People desperately want a resolution of the psyop, so they can return to their former continuum. And because they feel desperate, they’ll take whatever and whoever you give them. You can say a deer chewed on a power cable and blew out the power for the entire east coast for a week, and they’ll believe you.

“And that’s what you want. The ability to say anything and have people believe you.”

I asked Medavoy if this included peppering the public with contradictions in the official account of a terrorist attack.

“Of course,” he said. “They’ll overlook those contradictions. They won’t pay any attention to them. They’re so panicked, they just want a resolution. You can plug in anybody as the guilty party, and they’ll buy it.”

Later in the conversation, I went back to the subject of the “space-time wave.”

Medavoy said: “The psychology on this is clear. An overwhelming percentage of people deal with space-time in a passive way. They receive it, so to speak. They are presented with that fundament of reality and they blindly accept it. Therefore, when you take it away, they’re lost. A tiny percentage of the population, those who are intensely creative, react differently. That’s because they are, in a real sense, projecting their own space and time.”

Psyops planners who stage events are aware of these factors. They want to create a world, a picture of a world, that is in dangerous flux and absolutely requires our “leaders” to stop that flux.

One of my more vivid experiences of this came in the mid-1980s. I was interviewing a relative of a soldier who died in Vietnam. When the subject of whether the war was justified came up, he flew off the handle. He went into a towering rage.

The fact that his cousin had been killed there automatically made the war a necessary policy of the government, a correct action. That conclusion stopped the unbearable flux for him. Otherwise, he was lost.

There is a psychology operating here, and it isn’t merely some academic brand of nonsense. It cuts to the heart of how people literally exist in reality, and how it affects their deep response to events managed by professionals, who understand that psychology.

The author of two explosive collections, THE MATRIX REVEALED and EXIT FROM THE MATRIX, Jon was a candidate for a US Congressional seat in the 29th District of California. Nominated for a Pulitzer Prize, he has worked as an investigative reporter for 30 years, writing articles on politics, medicine, and health for CBS Healthwatch, LA Weekly, Spin Magazine, Stern, and other newspapers and magazines in the US and Europe. Jon has delivered lectures and seminars on global politics, health, logic, and creative power to audiences around the world. You can sign up for his free emails at www.nomorefakenews.com

7 thoughts on “All terror attacks are psyops”