Amazon Secretly Removes “1984″ From the Kindle 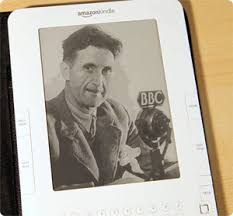 Thousands of people last week discovered that Amazon had quietly removed electronic copies of George Orwell’s 1984 from their Kindle e-book readers. In the process, Amazon revealed how easy censorship will be in the Kindle age.

In this case, the mass e-book removals were motivated by copyright . A company called MobileReference, who did not own the copyrights to the books 1984 and Animal Farm, uploaded both books to the Kindle store and started selling them. When the rights owner heard about this, they contacted Amazon and asked that the e-books be removed. And Amazon decided to erase them not just from the store, but from all the Kindles where they’d been downloaded. Amazon operators used the Kindle wireless network, called WhisperNet, to quietly delete the books from people’s devices and refund them the money they’d paid.

An uproar followed, with outraged customers pointing out the irony that Amazon was deleting copies of a novel about a fascist media state that constantly alters history by changing digital records of what has happened. Amazon’s action flies in the face of what people expect when they purchase a book. Under the “right of first sale” in the U.S., people can do whatever they like with a book after purchasing it, including giving it to a friend or reselling it. There is no option for a bookseller to take that book back once it’s sold.

Amazon’s published terms of service agreement for the Kindle does not appear to give the company the right to delete purchases after they have been made. It says Amazon grants customers the right to keep a “permanent copy of the applicable digital content.”

But this isn’t the first time there has been a problem with secret deletings. Stone adds:

Amazon appears to have deleted other purchased e-books from Kindles recently. Customers commenting on Web forums reported the disappearance of digital editions of the Harry Potter books and the novels of Ayn Rand over similar issues.

Now that the public is up in arms over the Kindle deletions, Amazon is once again promising good behavior. Amazon spokesman Drew Herdener told reporters:

We are changing our systems so that in the future we will not remove books from customers’ devices in these circumstances.