Washington, D.C.—Something quite unexpected happened just hours ago, in the dark of night, during a two-day layover in Washington, DC. My son and I are scheduled to take part in a seminar outside of Raleigh, North Carolina this weekend, so we combined our travels to include a side-trip to DC for a business meeting we had previously arranged. It was during this layover that something seemingly ripped from the pages of a spy novel took place.   END_OF_DOCUMENT_TOKEN_TO_BE_REPLACED

It is GREAT to see organizing and preparation taking place (back in 1995) for what is Clearly Approaching.. And I love that this speaker is from Ohio, being an Ohioan myself.

END_OF_DOCUMENT_TOKEN_TO_BE_REPLACED

The following photos were just sent to Beforeitsnews by a concerned reader who asked that we share these with the world. According to our reader, a relative in Gonzales, Louisiana captured these as the train was heading South. According to this person, there were THOUSANDS, not hundreds, of military vehicles on the move. As some photos show, “as far as the eye can see”. Where are they going? What are they preparing for? Hattip to Jason and Cindy.   END_OF_DOCUMENT_TOKEN_TO_BE_REPLACED

The Washington Times – by Andrea Noble

Authorities last week made an agreement not to prosecute a Northwest D.C. man who used his unregistered handgun to kill a pit bull in order to stop it from mauling a child in his neighborhood.

As part of the agreement, Benjamin Srigley, 39, was required to pay a $1,000 fine but will not have criminal charges filed against him for the three unregistered firearms and the ammunition that investigators found in his possession, said Ted Gest, a spokesman for the office of the attorney general.    END_OF_DOCUMENT_TOKEN_TO_BE_REPLACED 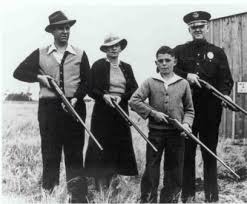 My old grandpa said to me ‘Son, there comes a time in every man’s life when he stops bustin’ knuckles and starts bustin’ caps, and usually it’s when he becomes too old to take a whoopin.’

Jefferson City, Mo (May 8, 2013) – Tonight, the Missouri State House voted to send Governor Jay Nixon what could arguably be the strongest defense against federal gun control measures in American history.  The vote was 116-38.

HB436, introduced by Representative Doug Funderburk in February, was initially passed by the House in April by a vote of 115-42.  Last week, the State Senate approved the bill with an amendment which did not change any of its nullification aspects. The vote there was 26-6.  The bill then needed one final vote in the house which happened just before 10pm local time this evening.   END_OF_DOCUMENT_TOKEN_TO_BE_REPLACED

A cooperative project is underway to bring firearms and accessories manufacturers and distributors to the Howell County Ozarks region of Missouri.  The project was initiated by a listener of the Americas Voice Now radio program who volunteered to put up one of three parcels of land to any manufacturer or distributor who would move to the region.   END_OF_DOCUMENT_TOKEN_TO_BE_REPLACED

Should the public discover the true health cost(s) of nuclear pollution, a cry would rise from all parts of the world and people would refuse to cooperate passively with their own death.    END_OF_DOCUMENT_TOKEN_TO_BE_REPLACED