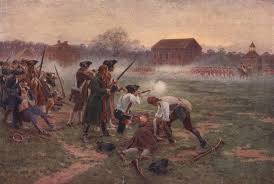 April 14, 1775 – Massachusetts Governor Gage is secretly ordered by the British to enforce the Coercive Acts and suppress “open rebellion” among colonists by using all necessary force.

That night, Paul Revere and William Dawes are sent from Boston to warn colonists. Revere reaches Lexington about midnight and warns Sam Adams and John Hancock who are hiding out there.

At dawn on April 19 about 70 armed Massachusetts militiamen stand face to face on Lexington Green with the British advance guard. An unordered ‘shot heard around the world’ begins the American Revolution. A volley of British muskets followed by a charge with bayonets leaves eight Americans dead and ten wounded. The British regroup and head for the depot in Concord, destroying the colonists’ weapons and supplies. At the North Bridge in Concord, a British platoon is attacked by militiamen, with 14 casualties.

British forces then begin a long retreat from Lexington back to Boston and are harassed and shot at all along the way by farmers and rebels and suffer over 250 casualties. News of the events at Lexington and Concord spreads like wildfire throughout the Colonies. 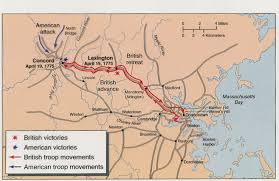 April 23, 1775 – The Provincial Congress in Massachusetts orders 13,600 American soldiers to be mobilized. Colonial volunteers from all over New England assemble and head for Boston, then establish camps around the city and begin a year long siege of British-held Boston.

May 10, 1775 – American forces led by Ethan Allen and Benedict Arnold capture Fort Ticonderoga in New York. The fort contains a much needed supply of military equipment including cannons which are then hauled to Boston by ox teams.

May 10, 1775 – The Second Continental Congress convenes in Philadelphia, with John Hancock elected as its president. On May 15, the Congress places the colonies in a state of defense. On June 15, the Congress unanimously votes to appoint George Washington general and commander-in-chief of the new Continental Army.

June 17, 1775 – The first major fight between British and American troops occurs at Boston in the Battle of Bunker Hill. American troops are dug in along the high ground of Breed’s Hill (the actual location) and are attacked by a frontal assault of over 2000 British soldiers who storm up the hill. The Americans are ordered not to fire until they can see “the whites of their eyes.” As the British get within 15 paces, the Americans let loose a deadly volley of musket fire and halt the British advance. The British then regroup and attack 30 minutes later with the same result. A third attack, however, succeeds as the Americans run out of ammunition and are left only with bayonets and stones to defend themselves. The British succeed in taking the hill, but at a loss of half their force, over a thousand casualties, with the Americans losing about 400, including important colonial leader, General Joseph Warren.

July 3, 1775 – At Cambridge, Massachusetts, George Washington takes command of the Continental Army which now has about 17,000 men.

July 5, 1775 – The Continental Congress adopts the Olive Branch Petition which expresses hope for a reconciliation with Britain, appealing directly to the King for help in achieving this. In August, King George III refuses even to look at the petition and instead issues a proclamation declaring the Americans to be in a state of open rebellion.

July 6, 1775 – The Continental Congress issues a Declaration on the Causes and Necessity of Taking Up Arms detailing the colonists’ reasons for fighting the British and states the Americans are “resolved to die free men rather than live as slaves.”