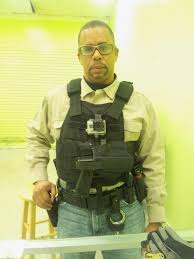 Darien Long, property manager of the Atlanta Metro Mall and darling of justice-related subreddits, is out of a job.

In an interview with Right This Minute, Long said that his last day on the job will be March 31. A representative for the broadcast news program told The Huffington Post that Long was fired because of publicity surrounding two videos he recorded on the job.

Long, who carries a firearm and a Taser stun gun, has a GoPro camera mounted on a bulletproof vest. His videos, which can be viewed on the YouTube channel “KickAssMallCop,” document the guard’s confrontations with people in the mall. Some show Long stunning people with Taser weapons.

Update: Mar. 21, 3:30 p.m. — In a phone interview with The Huffington Post, Darien Long clarified that the official reason he lost his job was because “revenues were down due to two vendors leaving” the Atlanta Metro Mall.

Long tied the departure of the vendors to an increase in police raids targeting merchants who sell counterfeit goods at the mall. Whereas he said such raids generally occur about once a year, two raids recently occurred in the space of four months.

The property manager believes that the crackdown is linked to the publicity generated by his videos, and others posted to Atlanta’s Downtown Criminal Culture, a Facebook page administered by Long and some associates.

Long told HuffPost that his videos brought attention to crime in the area and made the police look bad. For this reason, he believes there were “political reasons” behind his firing.

“If they get rid of me, the videos stop coming out of that area,” Long told HuffPost.

A representative for Right This Minute later clarified that the loss of Long’s job was “a combination of publicity and other elements, which [Long] addressed in the video.”

Previously:
In his interview with Right This Minute, Long indicated that bad business may have contributed to the loss of his job.

“You could kind of see the writing on the wall. Two of the vendors [are] actually leaving, revenues are down. There’s a whole bunch of stuff going on,” Long said.

During the interview, Long admitted that his aggressive style might make it hard to find employment in the security industry, adding that some employers might be “more concerned about their liability than what’s going on.”

Long became the beneficiary of a crowd-sourced fundraising campaign earlier this year after one of his videos went viral on Reddit. More than $23,000 was ultimately raised for Long via Crowdtilt.

Reddit user reactions to the news of Long’s job were mixed. Some were convinced that the job loss was the best thing for Long’s safety, while others were critical of his approach to keeping the peace.

“The last video I saw [the] dude went way too far. He was instigating the arguments and fights, putting his hands on people, pushing them when there was no reason for it. He tazed the one guy for no reason,” user “philhouse64” wrote. “Just goes to show what a little power and fame can do to a person. He was security guard, not a cop.”

In an earlier interview with WSB-TV, Long said that he wanted to “clean up” downtown Atlanta so that businesses would be more attracted to the district.