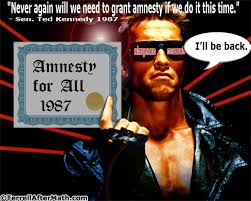 Before It’s News – by Frosty Wooldridge

The First Basic Law of Human Stupidity asserts without ambiguity: always and inevitably everyone underestimates the number of stupid individuals in circulation. At first, the statement sounds trivial. Closer scrutiny reveals its veracity. No matter how high are one’s estimates of human stupidity, one is repeatedly startled by the fact that: people whom one had once judged rational and intelligent turn out to be unashamedly stupid. Additionally, day after day, with unceasing monotony, one is harassed in one’s activities by stupid individuals who appear suddenly and unexpectedly in the most inconvenient places and at the most improbable moments. (Source: Carlo M. Cipolla, Professor of Economics, UC Berkeley)

Eight stupid U.S. senators, known as the “Gang of Eight” huddle to ensure the destruction of the United States of America.  Their gracious amnesty of 20 million illegal alien migrants now working and living in our country, will, in the end—result in an additional 100 million immigrants within the next three decades.  Those are the scientifically projected figures by Fogel/Martin in their “US Population Projections.”  (Source: www.fairus.org )

Everything about a mass amnesty allowing 20 million illegal aliens instant citizenship smoulders under a cloak of hidden agendas in Washington, DC.  At present, eight U.S. senators negotiate the future of our country.  Not only will they allow illegality by making it legal, they will increase legal immigration from its current 1.2 million annually to as high as 3.1 million annually.  In other words, they will swamp this country with third world immigrants from every corner of the globe.

In our world of water shortages, energy depletion and resource exhaustion—our Congress inundates our civilization with more and more people without any appreciation of growing consequences.

Roy Beck, president of www.NumbersUSA.org offers the most comprehensive understanding of our predicament in his 10 minute video: “Immigration by the numbers–off the charts.”http://www.youtube.com/watch?v=muw22wTePqQ

If every American viewed that video along with 535 congressional representatives, we would drastically reduce our legal and illegal immigration to less than 100,000 annually.  Why 100,000?  That’s how many egress the country annually. That would create a zero net gain of population.

The founder of Black Entertainment Television spoke about the indifference of Congress to incredibly high unemployment of African Americans. Federal data show that 40 percent of working-age Black Americans don’t have a job of any kind.  Who pays for their accelerating welfare needs?  Answer: you do!

“But there is no Senate Gang of Eight working day and night to put those Black Americans back to work.  There is no Gang of Eight grabbing headlines by creating legislation to keep blacks from being a lost generation in the labor market,” said Beck. “No, the only Gang of Eight working day and night with top priority urgency is the one trying to shove through an immigration bill to further engorge the labor markets with obviously unneeded workers.”

“The Senate Gang of Eight was doing high-fives all weekend about an agreement between business and labor lobbyists that supposedly would allow their comprehensive amnesty bill to be rushed to the Senate floor for a vote by May,” said Beck. “But suddenly, it was the Gang of Seven, with the stalwart eighth member, Sen. Marco Rubio (R-Fla.), talking about the need to “do it right”… let the other 92 Senators find out what is in the bill, find out the true costs, to include the impact on JOBS and U.S. unemployment, and study whether there might be better ways to reform our immigration system.”

Rubio demanded something rather extraordinary and old-fashioned: hearings of experts, an open amendment process and a full debate before the television cameras:

Rubio said, “The success of any major legislation depends on the acceptance and support of the American people. That support can only be earned through full and careful consideration of legislative language and an open process of amendments.”

“The Gang of Seven has not embraced Rubio’s attempt to slow-down the fast-track process by which pro-amnesty supporters have planned to rush the still-secret bill through the Judiciary Committee in a couple of weeks and get a vote on the Senate floor within a month with little debate and amending,” said Beck.  “The fast-track approach always attempts to side-track the public while giant amnesties and immigration increases are created in secret and then hurried through the legislative process before most elected officials even know what is in the thick bills.

“Sen. Leahy (D-Vt.), the Judiciary Committee chairman, announced last week that he did not intend to hold any hearings on the Gang of Eight bill once he receives it and that he would not allow opponents to slow-down his plan to get it to the floor by May.”

So, the “process” is the big issue of the moment and maybe this entire week.

“This is comforting news for those of us who oppose a bill that would further harm the 20  million Americans who can’t find a full-time job… and the millions more whose wages are depressed by a labor market glutted with 26 million foreign-born workers,” said Beck. “Many Floridians who suffered through years of Marco Rubio killing immigration enforcement legislation when he was in the state legislature doubt their junior Senator’s sincerity in his flap with other amnesty supporters. Others believe he will hop off the amnesty train if his demands for an open process are not met.”

“I respectfully suggest that such a process must begin with a careful examination in the Committee including: hearings that explore taxpayer-costs and multiple perspectives on the scope of the problems we face and the efficacy of the solutions we propose, markups in which a broad range of amendments can be considered, and a robust floor debate.”

“All of this, and any Conference Committee deliberations, should occur in the full view of the American people, broadcast on CSPAN, and streamed live on the internet.”

Rubio says about that claim:

“I am certain that those hearings deepened your knowledge of these issues and will guide much of your work this Congress. But they cannot be a substitute for fresh hearings to consider specific legislation as part of a national conversation.”

We desperately need  a  national discussion as to whether or not we will maintain ourselves as a sovereign country or “destination” for the world’s human population overload.  We must ask ourselves if we want to add 100 million immigrants into our country.  We must ask ourselves if we can survive the water, energy, resource and environmental consequences.  If we don’t, we will become victims of our own apathy and stupidity.