No Country For Gentiles.

The New World Order means One Bank One Vote will replace One Man One Vote.

David Rothkopf was the CEO of Kissinger Associates. He wrote the book Superclass in which he said that the world was run by 30 Families and their 6,000 Minions. The NWO merely replaces their authority within dozens of separate nations with their Absolute Power wielded through One World government while removing the facade of democracy.

The trade treaties TPP and TTIP take authority away from sovereign nations and turn it over to corporations. A Swiss study found that 147 corporations controlled 20% of world trade. The 30 Families and their 6,000 Minions allow these companies to be above the law and to exploit consumers in all nations. These treaties are stepping stones to a One World government.

Many nations have passed laws rejecting unfair labor practices like slavery so products from banned nations are not allowed to compete. No more. Malaysia recently found more mass graves where slaves had been buried. That is over and above the 139 grave sites already dug up. The TPP treaty would end sovereign decisions to reject slave labor products.

Several of the 30 Families are involved in Banking and Oil. All governments in the West gave Bankers the right to charge us interest on money they created  out of nothing. This transfers all wealth from us to the Bankers. Fractional Reserve banking allows them to loan out ten dollars for every dollar on deposit. That is the rule in the US. In London banks can loan out £33 for every pound on deposit.

A Depression is caused by the accumulation of Unpayable Debts. Our banking system generates Bad Debts by the tens of trillions. This knowledge has guided the 30 Families and their 6,000 Minions to create National Security States to protect themselves against the 99%. The Bankers remember that during the Great Depression 3 million Americans starved to death. The Superclass is worried what will happen to them if 10 million Americans starved to death in the next Depression.

President Kennedy spoke out about the plan to deliberately reduce the average man and woman to indebted servitude. 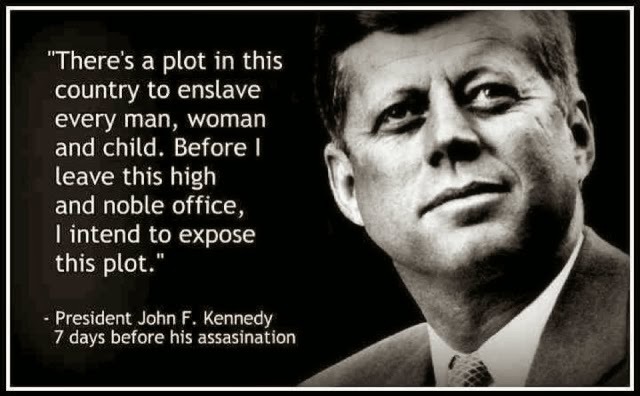 A Depression is defined as a period in time when Unpayable Debts are cancelled en masse. Foreclosures and bankruptcies mean the cancellation of Debt. We have Debt Based currencies so whenever we retire a debt either through either payment or foreclosure we face a tremendous Monetary Contraction. This massive reduction in Money Supply guarantees a huge round of layoffs which is what second rate economists define as a Depression. Scientists concern themselves with Causes and their Effects. In this case that would be the accumulation of Unpayable Debts and not with the unemployment created by the contraction of the Money Supply.

Bankers launder a trillion dollars a year in illegal drugs and weapons. They also launder $500 billion a year in political bribes. We are not allowed to say No to this corruption under the present system. I doubt we would be allowed to change that under a world government.

The Bankers used to make tremendous profits from the African slave trade. 90% of the ships that brought slaves to North and South America were owned by Jews. Slavery had been a Jewish occupation going back 2,500 years. Even today hundreds of thousands of women and children are trafficked every year. Since we do not see an equivalent number of women and children being released every year, we can conclude that they are killing 6 million women and children every 20 years. Many of the gangs doing this are Russian Jews.

The Bankers decided in the 19th century to replace their lucrative slave trade with illegal drugs. That is why the Bankers convinced Her Majesty’s Jewish government to fight two Opium Wars against China. That is also why the US invaded Afghanistan. The US government transports heroin for the Bankers. Today the average age of a first time heroin user in the US is 14 1/2 years-old. The destruction of our families and cities through drug addiction is of no concern to the 30 Families and their 6,000 Minions.

The NWO would allow the Bankers to run all of their competing drug dealers out of business. The major Drug Cartels, the Mexican Army and the Mexican government all work for the CIA which is a wholly owned subsidiary of the Bankers. The NWO promise is that the Mexican Drug Wars that killed 120,000 people would come to an end when small gangs are put out of business. Of course a National Police State backed by international armies and millions of Drug Gang Members on every continent with trillions in Drug Profits would forever eliminate any freedom you ever dreamed you had.

We have had a series of wars for the Banks and for Israel. One lure of the NWO is the promise that we would have no more wars against foreign nations. Not quite true. The US did enter WW I so the war could be made to last longer. The Bankers and the Zionists would have had no fun if the Great War had ended in 1915!

By entering WW I, President Wilson was guaranteeing a Jewish Communist revolution in Russia that led to the death of 60 million plus Gentiles. I think we would lose many more people under a single world government run by Bankers and Zionists than under the present system. The 30 Families and their 6,000 Minions have hired college professors to outline plans to reduce world population by billions. To date we have never had a war kill that many people.

In the ideal world we would arrest the Bankers and seize their assets to finance worldwide Debt Cancellation so we could cancel the Greatest Financial Crisis in history before it happened. We would need to issue a non-interest bearing currency and to repeal fractional reserve banking. We would also have to  legalize drugs so there were no more trillion dollar annual donations to the Bankers.

In conclusion I would say that if, as a result of a Financial Crisis, we allow international organizations to seize the sovereignty of our nation states that we will have no Borders, Unlimited Third World immigration and No Countries left for Gentiles.

2 thoughts on “No Country For Gentiles.”