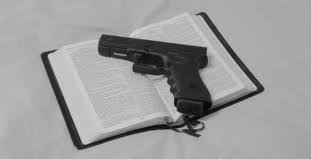 Have you pastors had enough of the rhetoric from those within our media who preach that owning a gun is detrimental to us as a nation? If so, please get in line, because it starts here with me. I’m big, black, bald, bad and love to hunt. Our very heritage, sovereignty and freedom we all enjoy are under attack, and the time has come to rise up and say: We are many in numbers, we won’t be stopped, and it starts with us.

Do you know anything about our history? We Americans are rich in giving to others, caring for the needy around the world. We love people – and we are a people who don’t always know our great history. Do the names Hitler, Lenin, Mao, Pol Pot, Tojo and the late Hugo Chavez of Venezuela ring a bell? They ought to, because they had one common interest: to gain control of their nations and destroy Christianity by seizing every weapon, in each and every home. This process was subtle but with horrendous results at the end. Because of their tyranny and compulsion to seize all guns, the end result was the murder and slaughter of over 60 million people. The church fell silent – the genocide in each one of these nations could have been avoided if the people had their guns and the had church stood up.

How many of our children in America will die before we get serious about the Second Amendment? We need to address the culprit from the pulpit. It’s the media and secular humanists aiming for our destruction, and we pastors can no longer remain silent. It’s their goal to control the masses exactly like the beasts mentioned above, with evil intent to bring fear to the masses regarding our God-given right to own a gun.

I thought it was stupid several years ago when the Seattle City Council announced, “We are a nuclear free zone” regarding nuclear bombs directed at the United States. I’m sure Russia, China, North Korea, the Islamic Brotherhood and all of our enemies abroad were saying they’d leave Seattle alone, right? This same foolishness of the liberal media and political leaders is seen across America today with signs that read “GUN FREE ZONE” in front of our public schools. Why not put up signs in front of our homes and businesses – and better yet, our churches – announcing there are no guns in the vicinity?

Or how about a sign that says, “I got some gold silver and platinum in the house and won’t be home until 2:30 or 3:00.” I think our children are more precious than those precious metals. Why not put up signs in front of the White House, the Capitol, police departments and our military bases that read, “THIS IS A GUN FREE ZONE”? I wonder if Joe Biden consulted the father of a Connecticut family, whose wife and two daughters were brutally murdered before him, before giving advice that it wouldn’t have occurred if his wife had stood on her porch with a shotgun to scare the killer off.

When will we as pastors wake up and DEMAND that media and political leaders address the fact that the murder of white children in their eyes takes priority over a black child in a city like Chicago. Check out the homicide statistics of the city in America that suffers the highest rate of violence, especially involving its children. I’ll give you a hint – it’s the home of the Bears, the Cubs, Bulls, the White Sox and, of course, Barack Obama.

The madness won’t stop until we pastors in America become real shepherds and defend our flocks.

Begin to understand our great history and especially the Second Amendment. Our president has surrounded himself with hundreds of security detail for his protection and safety, which is understandable. And they are not carrying water pistols.

So here is the question for you: Who is protecting you from those thugs who would break your door down and murder your family? Gangs are not reserved for the city projects in Chicago or L.A. Some of them live in the sanctuary of gangs at 1600 Pennsylvania Avenue, Washington D.C.

I am organizing a “Black Robe Brigade.” Join me by signing up at Hutch Post, and I will be in touch with you as we develop our strategies as a group.
Read more at http://www.wnd.com/2013/03/pistol-packing-pastors/#WMW91tQVDulDlcxJ.99