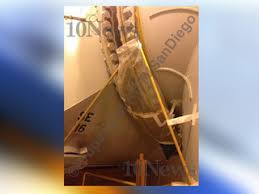 Unit Three is the same unit that leaked radiation in January 2012. SONGS has been shutdown since then as a precaution.

“[Staff] identified a small leak in the water box and will perform maintenance per our scheduling process,” SCE spokeswoman Maureen Brown wrote in a statement. “In the meantime, plastic is in place to direct the water from the small leak to a drain.”

(Team 10 took the picture to the Nuclear Regulatory Commission (NRC) to see what federal regulators had to say about the quick fix. See the commission’s response today on 10News at 5 p.m.)

“If that’s nuclear technology at work and that’s how we’re going to control leaks I think the public should know,” the inside source said.

More than one anonymous source talked about the picture with Team 10. They said the public has a right to know about the plant’s condition, as the NRC decides whether the plant will be allowed to restart.

Unit Two is the generator under consideration for restart – not Unit Three – where the picture was taken. Currently there are no plans to restart Unit Three.

Sources also pointed to what appears to be corrosion on the pipe as a sign of the power plant’s age.

They claim rust is rampant throughout SONGS — including what sources call a fire suppression pipe, which protects both units.

“To take an isolated picture and leap to some kind of conclusion about maintenance is a pretty big leap,” SCE’s Brown said in a phone conversation.

“We are dealing with unknown territory here which has never been explored before,” another inside source said. Two inside sources called restarting SONGS “risky.”

SCE disputes those claims and told Team 10 the plant is safe to restart.