A Mississippi college professor was shot and killed in his campus office on Monday, and police said a fellow Delta State University teacher was “a person of interest” in the shooting.

Authorities said they were searching for geography and social science instructor Shannon Lamb in connection with the killing of Ethan Schmidt, an assistant professor of American history.

Lamb was also a suspect in the killing of a woman in Mississippi earlier on Monday, police said.

The shooting left students and staff at the Cleveland, Mississippi, school on edge for several hours as police locked down the campus and searched buildings following reports of active gunfire.

Cleveland Police Chief Charles “Buster” Bingham told an afternoon news conference that authorities did not believe Lamb was still on the campus, which is near the Arkansas-Mississippi state line.

The killing was the latest in a series of shootings on U.S. college campuses in recent weeks, including deadly incidents at Sacramento City College in California, Texas Southern University and Georgia’s Savannah State University.

Bingham would not comment on Lamb’s possible connection to Schmidt.

Colleagues said they had no idea about a possible motive. “We’re all clueless,” said professor Charles Westmoreland, who taught history with Schmidt. “It’s been a terrible day.”

Westmoreland was teaching when he heard multiple shots coming from Schmidt’s office. A swift and orderly evacuation followed, he said.

Lamb was also being sought in an earlier shooting in Gautier, a town 300 miles (480 km) south of Delta State on the Mississippi Gulf coast.

Gautier police detective Matt Hoggatt said Lamb, 45, was wanted in connection with the death of Amy Prentiss, 41, with whom he shared a home.

He said Lamb was last seen driving a black 2011 Dodge Avenger with license plates from Stone County in south Mississippi.

Lamb’s Facebook page had numerous photos of Prentiss, whom he called his “Sweet Baby Angel,” in one photo post.

After receiving his doctorate in July, Lamb wrote he had “tried to maintain a relationship with the best girl in the whole wide world. (Amy Prentiss).”

Delta State officials said no students were injured in the campus shooting, which occurred in Jobe Hall, which houses the Division of Social Sciences and History. 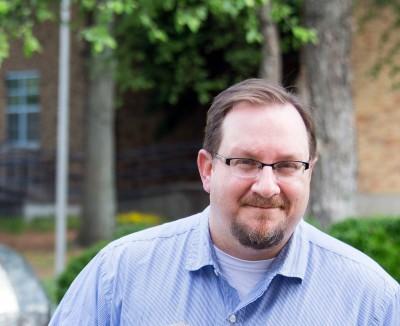 “I couldn’t have asked for a greater friend and colleague,” Westmoreland said of Schmidt. “He was warm and friendly to everyone and extremely involved in campus life.”

Schmidt was married with three children, he said.

“My colleagues and I are devastated by all of the news,” added Garry Jennings, a Delta State political science professor.

Schmidt, 39, was an excellent scholar and gifted teacher who went “beyond the call of duty” in his teaching, Jennings said in an email to Reuters. He was working with Schmidt on a program on Native Americans in November.

All classes at Delta State were canceled on Monday, as well as Tuesday, when events had been planned to commemorate the university’s 90th anniversary.

The slain professor earned a doctorate in early American history and Native American history from the University of Kansas and taught for six years at Texas Tech University before joining the faculty at Delta State, according to his school biography.

More than 4,000 students are enrolled in the public university, 120 miles (195 km) northwest of Jackson, Mississippi.

(Reporting by Therese Apel; Additional reporting by Suzannah Gonzales in Chicago and David Adams in Miami; Writing by Colleen Jenkins in Winston-Salem, N.C.; Editing by Eric Beech and Peter Cooney)