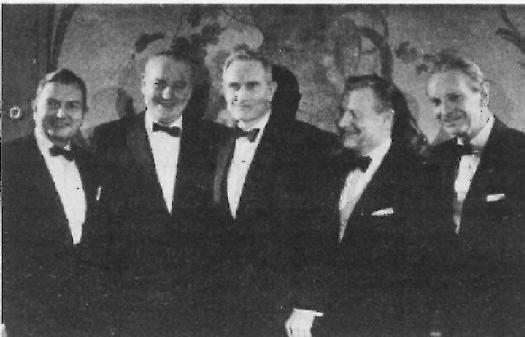 Most people are aware of the Rockefeller family’s dominance in the oil business, but what’s lesser known is that they also sold the stuff as a cure for cancer.

“Old Bill” Rockefeller was John Davidson’s father, and he pretended to be a doctor while he peddled raw petroleum under the name of “Nujol” to anyone who had cancer, and anyone he could scare into thinking they might get cancer. The profit margin was incredible, and this may have inspired the Rockefeller’s plunge into the world of chemical drug trafficking.     To advance this aspect of their empire, the Rockefeller cartel hired Abraham, Bernard, and Simon Flexner, and these three brothers were placed in strategic positions that enabled them to influence the future of American medicine.

Abraham and Simon set out to change the direction of medical education away from physiology, and toward pharmacology, to insure that American doctors would be as effective at selling drugs as Old Bill was. Bernard was the political manipulator, and he became one of the founders of the Council on Foreign Relations.

In 1910, Abraham Flexner, who himself had no medical education whatsoever, prepared a report for Rockefeller and Carnegie interests on the state of medical education in the United States and Canada. Shortly afterward, the medical mafia was born, and by 1918, we had dropped from six hundred and fifty medical schools down to only fifty, who only survived because they agreed to promote pharmaceutical drugs as the main component of therapy.

All other forms of thought and teaching regarding healthcare were branded as “quackery”, regardless of how effective they might be. The Rockefeller and Carnegie foundations formed a medical monopoly that crushed any method of healing that didn’t subscribe to their use of chemical drugs, and their “scientific medicine” philosophy.

And it was Rockefeller and Carnegie money that developed the new medical schools that conditioned doctors to rely only on chemical cures, and ignore any form of homeopathy, or naturopathy. That would eventually insure that all medical professionals became full-time drug pushers for the Rockefellers, while mistakenly convinced in their arrogance that they were doing their best to help humanity.

Today, Rockefeller interests still control much of the pharmaceutical industry. They became a global force when they partnered with I.G. Farbin of Germany, who became the biggest producer of chemicals in the world before funding Adolf Hitler, who led the charge into the incredibly profitable financial windfall known as World War Two. Rockefeller money also gave us the “Kaiser Wilhelm Institute for Anthropology, Eugenics, and Human Heredity” that led Germany’s ethnic cleansing movement, which was another milestone in the ongoing Ashkenazi effort to eradicate Sephardic Jews. This is the genocidal mentality of the people presently supplying America with “medicine”, who have publicly proclaimed their desire to see most of us dead.

There’s a hundred year-history of media-created epidemic hoaxes being employed as a tool for selling vaccines, but there’s never any shortage of people lining up for their flu shot, or subjecting their newborns to a cocktail of vaccines of dubius effectiveness, and known poisons. It’s a simple matter of the Zionist media working hand in glove with the Zionist pharmaceutical companies to instil the fear of death or illness, and then reaping the profits from the protection they’re selling.

And of course, there’s never any dissenting opinion from academia, because they know who butters their bread, and instead of intellectually addressing the 100,000 people killed every year by pharmaceuticals, they bury the atrocity in pseudo-science to keep the cash flowing in, and the American people in the dark.

Your doctor believes in his education, and he probably also believes that he’s doing what’s best for you. The problem is that he was immersed into a culture that was created by and for the pharmaceutical companies, and has no idea that his education and career have been designed for their profit. He was taught that there’s a chemical solution to all human illness, and he knows nothing of natural cures, or his educator’s efforts to suppress them.

I’m not suggesting that the entire medical profession is fraudulent or incompetent, only that their education has been arranged by drug pushers, and their profession usurped by insurance companies, and the fact of the matter is that there’s little a doctor with the best of intentions can do other than submit to the medical mafia if he wants to keep his license to practice medicine.

One of the biggest cash cows in the medical rackets is A.I.D.S., because people will pay anything to avoid certain death, and after testing positive for the HIV virus, many people’s lives become a scramble to pay for the medicines needed to keep them alive. It’s usually a cocktail of expensive drugs, but they’ll do whatever’s necessary to acquire them.

You can’t blame someone for struggling to survive, but the problem here is that the H.I.V. virus doesn’t cause A.I.D.S., which leaves these people struggling to acquire drugs they don’t need, and which will probably induce illness they wouldn’t  otherwise have had to endure.

The reason for this is that the identification of the HIV virus, and it’s connection to AIDS is an act of fraud* that’s reaping billions in drug profits, but of course, the fact of the world’s foremost AIDS researchers dying in a plane crash on their way to the AIDS conference, can only be a coincidence.

Chemotherapy kills more people than it cures, and anti-depressants are linked to extremely violent behavior. Vaccines are killing people, and sometimes causing the illnesses they claim to cure. Advertising is dominated by snake-oil salesmen, pushing potentially deadly chemical cures for every conceivable ailment. No one tries to cure anything, because the money is in a lifetime of treatments, that drain the last pennies away from anyone who gets sick.

The only thing I can think of that would be worse than a nation’s medical knowledge and education being sacrificed for the profits of drug pushers, is this same medical mafia forcing laws upon us to make the ingestion of their poisons mandatory.

When a corrupt and tyrannical government forces their population to consume poison, a political problem exists that can’t be ignored, and the rebellion in this arena should begin among the ranks of the doctors themselves, or the millions of chemically-sickened might see them as part of the problem. If they’re taking kickbacks for prescribing drugs, or falsely diagnosing cancer just to peddle chemotherapy, they’re the part of the problem that needs to be hanged by their stethoscopes.

With cancer rates skyrocketing, and a huge surplus of oil on the market, I wouldn’t be surprised to see Nujol make a comeback. It’s probably as effective as chemotherapy, and half as toxic, but of course, for advanced cancer, you might want to go straight for the transmission fluid. Ask your doctor.   — Jolly Roger

* “identification of the HIV virus, and it’s connection to AIDS is an act of fraud”

Learn more (from the source of much of this article):
AIDS, Opium, Diamonds, and Empire (the deadly virus of international greed)  – Nancy Turner Banks, M.D.