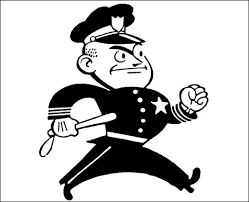 Vatic Note:  There are two different stories here for a good reason, the second amendment and why its becoming even more important than in the past.  The first video is about the boy these cops “murdered” and then they got away with it. What message does that send to these cops?  They will not be held accountable for their abject abuse of power and felony murders they commit in the process of doing their jobs.

The title is misleading.  What happened was a sort of grand jury recommending prosecution, it was not a full trial, rather a preliminary hearing before a grand jury.  The GJ recommended prosecution based on the evidence and those prosecuting, did nothing and let them walk away.

They broke this unarmed kids neck by abject abuse.  The rest of the video discusses the horrible treatment these protestors received at the hands of the police for simply protesting and getting arrested, but murder was allowed to occur.  Yes, the criminal justice system is upside down and this author of this video is right.

When justice is out of reach to the people while the power structure can walk away from murder, then people will have to claim justice in their own way.  The system simply does not work.  Racism is running rampid with the foreign occupiers of our government and always has been. This is just one example which tells me who is running the gov in Milwaukee.

Now look at video #2 and what a difference citizens being armed made in this incounter.  There was no question there was a major difference in the respect level when those being questioned were legally armed and willing to stand for their rights.

Same with the owner of the restaurant standing with his customers against the police who tried to conjole him into removing these gun owners from his restaurant.  Big difference and now we can see the rationale of our founding fathers for instituting the second amendment.

Published by tacktikalguy on Jul 7, 2013

Another story that the media will ignore. However, we can see the front pages filled with what celebrities did over the fourth of July weekend! “When tyranny becomes law, rebellion becomes duty”.

Video #1 – Cop kills boy and walks  free with back pay.

Video #2 –  Major difference in how they are treated since they were in open carry with their weapons.  No way should we ever give up our guns.  Never.

What a deterrent to any unconstitutional or unlawful people trying to cause trouble for the owner of this fine establishment.

5 thoughts on “Cops kill boy, jury finds them guilty, but judges let them walk with backpay!”