Elderly Woman Dies in Court “Gasping for Breath” After Sheriff’s Deputies “Callously” Refused to Give Her Medication, Daughter Claims 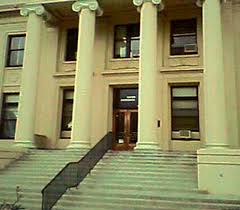 MONTGOMERY, Ala. (CN) – A woman died on a courthouse floor because Alabama sheriff’s deputies refused to give her her medicine – after arresting her for an old traffic ticket, the woman’s daughter claims in court.

London claims her mother, Dwana Voncia London-Richardson, died gasping for breath in court after callous and unconstitutional treatment from the defendants.

Richardson suffered from asthma and other serious health problems, but the defendants refused to give her her medication, accused her of faking, and let her die in the courtroom, her daughter claims.

Her 45-year-old mother died in May 2011 at the St. Clair County Courthouse while in the sheriff’s custody.

London claims that when she visited her mom in jail two days later, her mother could hardly walk, had trouble breathing and complained of pain in both legs.

London claims the jail staff refused to give her mom her asthma medication and stopped other inmates from helping her.

“Ms. Richardson told Ayunna that she was sick, that both her legs were hurting her so badly that she could not walk to the tray area to pick up her food, and that they would not give her her medicine,” the complaint states.

Jail staff refused to take Richardson to the hospital, despite her worsening condition, her daughter says.

On May 23, deputies took her mother to court and ignored her need for medical care until it was too late, London says.

“When she pulled into the fire station, she saw her mother lying on the ground next to the police car with her legs extended under the police car.

“She asked them what had happened and her mother told her that she did not know, that she had just passed out. Ms. Richardson was sweating and struggling breathing.

“Ayunna gave her mother the asthma pump but it was not working. Her mother’s breathing continued to get worse.”

London says the deputies still refused to take her mom to the hospital, and said would be locked up if she didn’t keep her court date.

“Ms. Richardson was unable to walk,” the complaint states. “Deputy (or jailer) Doe obtained an office chair from the courthouse and they used it to wheel Ms. Richardson to the courtroom.

“Ayunna set beside deputy (or jailer) Doe and her mother, fanning her mother, whose breathing continued to get worse.

“After sitting in the courtroom waiting for about twenty minutes, Ms. Richardson stated that she ‘could not take anymore,’ and she told deputy/jailer Doe that she needed help.

“Ayunna also pleaded with deputy/jailer Doe to get someone to help her mother.

“Deputy/jailer Doe responded as though he believed Ms. Richardson was just putting on.

“Ms. Richardson then stated ‘I need to lay down.’

“Ms. Richardson laid down on the courtroom floor and her body started to shaking.

“Deputy/jailer Doe took no action to assist Ms. Richardson or to clear the courtroom.

“Ayunna stayed beside her mother trying to do CPR to bring her back for about twenty minutes, but she failed.”

Emergency personnel arrived 45 minutes later and took Richardson, who was unresponsive, to the hospital.

London says her mother was pronounced dead within 5 minutes of arriving at the hospital.

She is represented by Charles Tatum Jr. of Jasper, Ala

7 thoughts on “Elderly Woman Dies in Court “Gasping for Breath” After Sheriff’s Deputies “Callously” Refused to Give Her Medication, Daughter Claims”