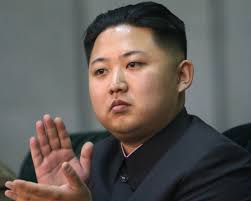 Kim Jong-Un is eagerly awaiting a phone call from Barack Obama, hoping that a one on one chat will ease the brewing tensions between the two nations and, quite possibly, to arrange a one on one game of hoops? I’d put my money on Kim after watching Obama’s latest shoot around. If you haven’t seen that yet, check out the videos down below for your ‘comedic relief’. We also learn that Kim has 8 nuclear warheads; hopefully they’re not all mounted on a satellite in space and aimed at America. According to Russian news agency Itar-Tass,

The report cited United Kingdom diplomats, saying Pyongyang was demanding the U.S. president personally call Kim Jong-un as one of the conditions to relieve the current conflict at hand.

Back a month or so ago, in this almost comical affair, ex-basketball player Dennis Rodman visited Kim in North Korea and Kim, a huge fan of basketball himself, told Rodman that maybe Obama and he sould sit down and chat over a game of basketball, a sport the two have a common passion for. Dennis Rodman, Ambassador to North Korea? Kim must be salivating at a shot for a one on one game against Obama; did you see his latest shootaround? 2 for 22! Check out the video below for a good laugh. My money’s on Kim in this one!

Rodman’s bizarre antics, as well the former NBA star’s suggestion that President Obama should follow Rodman’s lead by using his and Kim’s mutual love of basketball to break the ice. But Rodman — aka “The Worm” — might be right, suggests Danile Pinkston of the International Crisis Group (via Britain’s Guardian). Nothing else seems to be working, but “basketball diplomacy” might really be a way to “deliver a Trojan horse of subversion” to the isolated communist regime, “just as Gorbachev’s perestroika did for the USSR and the lifting of travel restrictions did for East Germany.” Kim already has embraced a tattooed and pierced American, which is not a bad start.