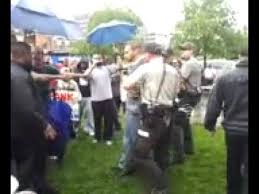 Former marine, radio host and political activist Adam Kokesh was arrested at a marijuana legalization assembly in Philadelphia today, according to Facebook posts.

In a video of the Smoke Down Prohibition rally, policemen can be seen entering a crowd of activists, and shortly afterwards emerging with Kokesh in tow.

According to his Facebook page, Kokesh “hadn’t even smoked yet,” while “other protesters were actually smoking and released after arrest…,” leading us to wonder why he was being arrested/assaulted in the first place.

Kokesh was reportedly hauled away in a white Chevy Suburban, but an update states he has already been released from jail.

The talk radio host recently garnered national attention when he announced a July 4th armed march on Washington D.C. in defiance of the capitol’s firearms laws. As of yet, it’s unclear whether his connection to the upcoming event had anything to do with his arrest today.