A thirty-five minute surveillance video has been released as part of the evidence during the trial of three former corrections officers in Lawrence County Ohio for excessive force. Corrections Officers Jeremy S. Hanshaw, Ronald S. Hatfield and Jason D. Mays can be seen beating, kicking, choking, and smothering an inmate continuously throughout that video. That inmate, Larry Kinstler, was restrained the entire time. Initially, he was in handcuffs while in subsequent assaults he was fully restrained and unable to move at all.

Previously, a shortened version of the video was released (both versions are embedded below) that only showed the initial beating by the guards. The full video includes two more instances where he is beaten. Those consist of him being choked while strapped into a “restraint chair” and again being beaten and choked while strapped down to a paramedics’ stretcher. There’s no sound on the surveillance footage, but the video speaks for itself. 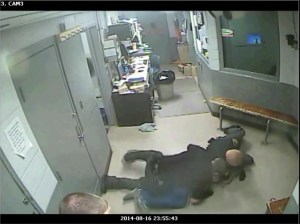 The three officers are each charged with conspiring to deprive, and depriving an arrestee of civil rights while acting under the color of law as deputies of the Lawrence County Sheriff’s Office. They were indicted on federal charges in January and are currently on trial for those charges. They each face up to ten years in prison if they are found guilty. Kinstler was in the Lawrence County Jail as a result of being arrested for the minor offense of disorderly conduct after getting drunk during the “Rally on the River,” an annual motorcycle rally in Ironton, OH.