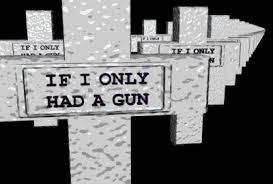 I can tell the anti-gun crowd is getting wackier by the day. They think we buy this garbage hook, line and sinker. These people are chicken necks and absolute morons. If it was not for political brown-nosing of the suck up Police Chiefs, they would not qualify selling Kirby vacuum cleaners. Police Chiefs in these big cities are not elected. They are appointed by the Mayor and prostitute for the Federal Government frequently to get Federal Grant money.

Here is some of the asinine advice these political hack police officials are giving:

1. Just Dial 911 is what some police chiefs will say, If we use a baseball bat to defend our home, we can go to jail. The other thing is the Police are not legally obligated to respond to a 911 call.

2. The Department of Homeland Security released a video on how to defend ourselves in the work place if a shooter came in. Their advice was to pick up blunt object. They never mentioned of having a Conceal Carry permit bringing a gun into the work place. That means using scissors.

3. The DHS also said lay down and die if a shooter starts shooting.

4. The Capital Police offered the advice in a school shooting to confront the assailant unarmed. Nothing about teachers and staff being armed. They give the advice of trying to stop a shooting being a disarmed slave. What are they thinking?

The US Capital Police advice stopping a shooter in school is:

”You must be committed to the actions you will take, and your attack must be explosive and violent. You must do whatever it takes to survive and not worry about the consequences. You want to disable the offender with whatever means you can. This could involve throwing items or using objects to strike, stab or slash the subject.”

What kind of advice is that?

5. Now here is the real stupid advice to ladies on collage campuses. The University of Colorado told their female students who are forbidden to carry concealed on campus. So how are females supposed to fend off a rapist? The female student cannot carry guns in her purse. So what is a woman on a Colorado campus is supposed to defend herself?

The advice from the UCO Administration said if a female student is about to get raped. The University of Colorado  recommends a woman should pee her pants or induce vomiting to defend herself against a violent rapist. Will that keep a rapist away or discourage them? He might get turned on if a female victim pukes or pees on herself. Rapists are sexual deviants. I’d rather see a rapist wet his pants when she pulls out a 357 magnum seeing his life flash before him.

6. Senator Diane Fienstien told Californians to lay down their arms when Dorner was on the run after shooting police officers. Who the hell is she to tell people to be sitting ducks for an armed and dangerous shooter? She is a real fruitcake.

These gun grabbers are out of touch and out of reality. If this advice is so good. Their security detail should turn in their guns and carry scissors and practice wetting themselves when attacked if their advice works so well. They want rules for themselves and rules for the peasants.

The mindset of these anti gun people really baffles me. The Chicago Police Chief saying Pro gun supporters are guilty of corruption. This comes from a city with high crime rates and a corrupt city government and election fraud. The people are disarmed and will go to jail defending themselves from criminals. It shows these anti gun people are now in la la land.

The same group that tells a woman she has the right to choose to have an abortion will deny her the choice to defend herself. They want the woman disarmed and a victim when it comes to the choice of self defense. The gun grabbers are showing they are real morons and imbeciles when it comes to common sense.  This is why they have no credibility anymore? Do they know no one listens to them anymore? I don’t. Do you? Their advice will get me killed if I believe them.

These anti-gunners do not understand the more they talk, the more people push back buying guns and ammo. Enough said.