Eurozone Bank Crisis is Back on; Now Depositors are Robbed in Spain 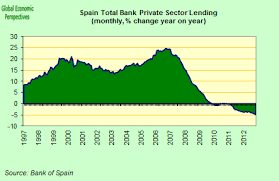 Before It’s News – by muckracker 1

Significant contagion has appeared in the first 24 hours after the Cyprus bank crisis “resolution,” with the forced bankruptcy of a large Spanish bank inclusive of a partial wipeout of depositors, and the pounding of bank stocks on the markets of Spain and Italy. Trading in bank stocks had to be halted multiple times in both countries to slow the plunge, and a downgrade of Italian sovereign credit by ratings agencies appears imminent. The euro currency also fell sharply, including — ironically — against the Russian ruble.

Already overnight yesterday, there were commentaries by leading figures such as former ECB chief economist Juergen Stark and major dailies such as the Irish Independent and London’s Guardian, that the Cyprus bank bailout was not large enough, the shutdown of number-two Cyprus Popular Bank, or Laiki, would be followed by number-one Bank of Cyprus and a collapse of the Cypriot economy. But the contagion is turning out not to be “contained” to Cyprus, as Ben Bernanke once famously forecast of the U.S. mortgage meltdown.

A significant trigger was a very damaging admission by the President of the so-called Eurogroup, Netherlands Finance Minister Jeroen Dijsselbloem. Reuters’ headline of the interview with Dijsselbloem, “Cyprus a Template for the EU,” was a warning to bank depositors Europe-wide that their deposits could and would be lost in any bank that became a target for “resolution.”

Dijsselbloem said, “What we’ve done last night is what I call pushing back the risks. If there is a risk in a bank, our first question should be ‘Okay, what are you in the bank going to do about that? What can you do to recapitalize yourself?’ If the bank can’t do it, then we’ll talk to the shareholders and the bondholders, we’ll ask them to contribute in recapitalizing the bank — and if necessary the uninsured deposit holders.”

Even as Dijsselbloem spoke there was a forced bank failure in Spain in which depositors lost their money. The Wall Street Journal reported today that of the banks effectively nationalized under the government lending agency FROB 18 months ago, a big one (Bankia) and a small one (Catalunya) are being bankrupted and taken over by FROB, apparently with a EU40 billion bailout loan from the European Stability Mechanism (ESM). This was ordered by European Commission after FROB failed in an attempt to sell Catalunya. The FROB will effectively own all the stock in the restructured banks, with the existing stockholders and junior bondholders losing 99.5% of their investments.

But in the Bankia case the stockholders include large numbers of depositors, conned into buying Bankia stock with their deposits in 2011-12, and now losing those deposits. This was precisely the widespread bank practice exposed in the United States in 1933 by the famous “Pecora hearings” in the Senate Banking Committee, and then prohibited under the Glass-Steagall Act.  SEE VIDEO