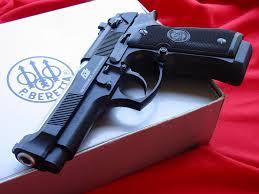 Spurred by the Newtown massacre, Maryland is poised to pass one of the strictest gun control laws in the country.

If Maryland does pass the legislation and Democratic Gov. Martin O’Malley does sign the bill, as is expected, one of the largest gun manufacturers in the country Beretta USA is considering a move elsewhere, taking with it approximately 400 jobs. Republican Gov. Rick Perry of Texas has already put out the welcome mat for any gun manufacturers looking to move.

Beretta claims that the law that would forbid 10-bullet magazines would make the manufacture of their 9mm 13-bullet magazine illegal in Maryland. Beretta says it moved one of its factories to Virginia the last time Maryland tightened its laws.

Such talk, however, doesn’t faze the people supporting the new legislation. They see the new law as long overdue. Even before the bill passes, the Brady Campaign to Prevent Gun Violence had ranked Maryland’s gun laws as the seventh strictest in the nation.

The new law, which will probably be passed this week, would also ban 45 assault-type weapons, set up licensing and fingerprinting of gun buyers, and ban sales to anyone who has been committed to a mental hospital.

I haven’t heard back from my inquiries to Springfield Armory or Rock River Arms, and Kimber and Remington (in New York) are playing coy right now.  But I have a feeling that Beretta will put their money where there mouth is.  Beretta is [rightfully] concerned about public reaction to this outrage.  The American civilian gun market is more powerful and wealthy by a long shot than police or defense contracts, and gun owners rarely forgive and never forget.  Just ask Smith and Wesson about the boycott that just about killed their company.

My message to Maryland?  Bring it.  Bring on the bans, let Beretta move and take 400+ jobs with them, and let gun owners like me work hard the rest of our lives to avoid doing business with Maryland ever again or even driving through Maryland.

Consequences are the best educational tool in the world.  Some people never learn that lesson as children.