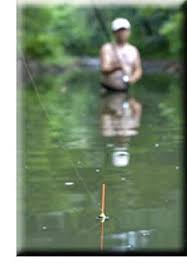 I haven’t fished much since I was a kid, mostly because I just don’t have the time.  I’m not going to cover the basics of fishing.  Instead, I want to go over some tactics for survival fishing.  Some of these ways to fish may or may not be legal in your area.  Check your local laws.  These are good things to have an understanding of.  If you find yourself in a survival situation, legal or not, you’ll do what you need to do survive.

I keep a mini kit in an Altoids Tin in my car.  In it, I have 25 feet of fishing line, some small sinkers, multiple hooks and some rubber minnows.  If I were to go hiking or find myself in a remote area, I would carry the kit with me.  I also carry a 100’ hank of para cord and a pocket knife.  I could make cordage and make a hook.  To me it makes more sense to carry those things, as they are so small and light weight.

Looking for bait should be fairly easy in non-frozen areas.  Turn over rocks and pieces of wood to look for worms and insects that you can put on a hook.  I have even read where people have successfully used flowers as bait.  Once you catch a fish, parts of it can be used for more bait.  One problem that might become an advantage is litter or trash.  If you have or can find a plastic bottle, you can turn it into a minnow trap.  The link shows bread for bait but worms or bugs should work as well.  Here is a link that shows how to make a lure out of a small section of paracord.

In a survival situation, there are a lot of things that need to be done.  While you could use traditional fishing methods, with a pole, line, hook and bait, that means you need to be there to watch the line.  With a trot line, once you have it set up, you’re free to go do other things.  As you can see from my very pretty (hand drawn by yours truly) image below, a trot line is basically one long strand of line with many smaller lines attached along its length and a hook at the bottom of each.  In my drawing, I have the line staked at shore, with one anchor in the middle keeping it all from floating to the surface and an anchor and float at the end keeping the line taut. You’ll need to bait each hook and keep them from getting tangled.  Leave it set for a few hours, when you start to “reel” the line in, hopefully you’ve caught more than one fish.

This comes from the Army field manual on survival; FM 21-76.

“A stakeout is a fishing device you can use in a hostile environment (Figure 8-18). To construct a stakeout, drive two supple saplings into the bottom of the lake, pond, or stream with their tops just below the water surface. Tie a cord between them and slightly below the surface. Tie two short cords with hooks or gorges to this cord, ensuring that they cannot wrap around the poles or each other. They should also not slip along the long cord. Bait the hooks or gorges.”

If you have the cordage, you can also make a net.  Paracord would work perfectly for this!  Take off the outer shielding, which gives you seven thinner threads.  I’ve never made a net, but below are some instructions from the Army field manual on survival; FM 21-76.  Granted, making a net is fairly labor intensive, but once it is made you can set it and check on it periodically.

If a gill net is not available, you can make one using parachute suspension line or similar material (Figure 8-19). Remove the core lines from the suspension line and tie the easing between two trees. Attach several core lines to the easing by doubling them over and tying them with prusik knots or girth hitches. The length of the desired net and the size of the mesh determine the number of core lines used and the space between them. Starting at one end of the easing, tie the second and the third core lines together using an overhand knot. Then tie the fourth and fifth, sixth and seventh, and so on, until you reach the last core line. You should now have all core lines tied in pairs with a single core line hanging at each end. Start the second row with the first core line, tie it to the second, the third to the fourth, and so on.”

“To keep the rows even and to regulate the size of the mesh, tie a guideline to the trees. Position the guideline on the opposite side of the net you are working on. Move the guideline down after completing each row. The lines will always hang in pairs and you always tie a cord from one pair to a cord from an adjoining pair. Continue tying rows until the net is the desired width. Thread a suspension line easing along the bottom of the net to strengthen it. Use the gill net as shown in Figure 8-20.”

Here is a video showing how to make a net.

Another option, trapping, is fairly labor intensive as well.  Again, once it is made you can set it and check on it periodically.  Here is some information, also from the Army field manual on survival; FM 21-76.

“You may trap fish using several methods (Figure 8-21). Fish baskets are one method. You construct them by lashing several sticks together with vines into a funnel shape. You close the top, leaving a hole large enough for the fish to swim through.”

“You can also use traps to catch saltwater fish, as schools regularly approach the shore with the incoming tide and often move parallel to the shore. Pick a location at high tide and build the trap at low tide. On rocky shores, use natural rock pools. On coral islands, use natural pools on the surface of reefs by blocking the openings as the tide recedes. On sandy shores, use sandbars and the ditches they enclose. Build the trap as a low stone wall extending outward into the water and forming an angle with the shore.”

Here is a site that shows you how to make a fish trap, not quite step by step, but many more pictures than what the Army manual has.

Also from the Army field manual on survival; FM 21-76.

“If you are near shallow water (about waist deep) where the fish are large and plentiful, you can spear them. To make a spear, cut a long, straight sapling (Figure 8-22). Sharpen the end to a point or attach a knife, jagged piece of bone, or sharpened metal. You can also make a spear by splitting the shaft a few inches down from the end and inserting a piece of wood to act as a spreader. You then sharpen the two separated halves to points. To spear fish, find an area where fish either gather or where there is a fish run. Place the spear point into the water and slowly move it toward the fish. Then, with a sudden push, impale the fish on the stream bottom. Do not try to lift the fish with the spear, as it with probably slip off and you will lose it; hold the spear with one hand and grab and hold the fish with the other. Do not throw the spear, especially if the point is a knife. You cannot afford to lose a knife in a survival situation. Be alert to the problems caused by light refraction when looking at objects in the water.”

There is a type of spear called a “frog gig” that I actually like better than the one described.  Below is a picture.  Clicking the picture will take you to a video that explains how to make it.

Also from the Army field manual on survival; FM 21-76.

“You must know how to prepare fish and game for cooking and storage in a survival situation. Improper cleaning or storage can result in inedible fish or game.

Do not eat fish that appears spoiled. Cooking does not ensure that spoiled fish will be edible. Signs of spoilage are–

Eating spoiled or rotten fish may cause diarrhea, nausea, cramps, vomiting, itching, paralysis, or a metallic taste in the mouth. These symptoms appear suddenly, one to six hours after eating. Induce vomiting if symptoms appear.

Fish spoils quickly after death, especially on a hot day. Prepare fish for eating as soon as possible after catching it. Cut out the gills and large blood vessels that lie near the spine. Gut fish that is more than 10 centimeters long. Scale or skin the fish.

You can impale a whole fish on a stick and cook it over an open fire. However, boiling the fish with the skin on is the best way to get the most food value. The fats and oil are under the skin and, by boiling, you can save the juices for broth. You can use any of the methods used to cook plant food to cook fish. Pack fish into a ball of clay and bury it in the coals of a fire until the clay hardens. Break open the clay ball to get to the cooked fish. Fish is done when the meat flakes off. If you plan to keep the fish for later, smoke or fry it. To prepare fish for smoking, cut off the head and remove the backbone.”

One thought on “Survival Fishing”