Everybody, especially our [s]elected officials, talk about how freedom isn’t free.

The desired implication, of course, is that ‘we [working] people’ must sacrifice our lives to maintain it. But, did you ever ask yourself why?

If people are ‘born free’, then why must we fight to remain free? More importantly, exactly WHO or WHAT are we supposed to be fighting?

Or better yet, why (if Americans are so free) do we work all our lives to attain ‘financial freedom’?

Is this the same freedom that we fight for with guns and F16s? But, we already know that’s bogus. So, what’s the deal?

I smell a rat.

In this excerpt, an anonymous author demonstrates how the banking system and its bastard children FRACTIONAL RESERVE BANKING, CREDIT, and INTEREST, which are nothing but a euphemism for legalized, government facilitated private resource allocation, inflation, and extortion, has managed to enslave almost every American, leaving US with only the illusion of freedom.

Many people today do not understand the true nature of interest.

They have no idea that there are other possibilities besides slaving one’s life away for the moneylenders. . . .

All the ads that surround us are not going to help us to control our desires. On the contrary, their aim is to make us want many things that we cannot afford. If we do not make a conscious decision to control our spending, human nature will coax us along with the herd into spending more than we earn—which can only result in debt. This destroys our happiness and spending power, because we not only pay for it later, we pay for it with interest. Debt would not be so bad if you only had to pay back $10 for every $10 borrowed. But unless you borrow from generous family members, you will pay back $15, $20, or even $30 for every $10 borrowed.

Lastly, the plague of Debt Slavery can be blamed on the “system”—the credit card companies and the economy itself. The credit card companies are guilty because they send out 6 BILLION credit card offers a year to families nationwide (that is the actual number, not an exaggeration!). And when they get you to carry a balance, they only ask for a small monthly payment—which barely covers the interest on the loan, keeping their victims in debt for many years.

The economy is also to blame because there is not enough money in circulation to go around [I disagree – there is, but a few people hoard it and bid up asset prices with it]. But the credit card companies are not all-powerful—they are easily resisted. So the victims of their schemes must bear at least part of the blame. After all, I receive dozens of such offers every month, and I know what todo with them. I cast them with disgust into the trash where they belong. I react as if someone tried to chain me up and cart me off to prison (because that is what they DID try to do!)

To illustrate the evil of Debt Slavery, take a family that has a $9,000 balance (the current national average) on a credit card that has an 18 percent interest rate. Since they read How to avoid Debt Slavery, they decide to cut up the card and never use it again. Even if they pay the minimum payment of 2 percent of the balance each month, plus interest, it will take them 47 years (and close to $33,000) to pay off that $9,000 debt!

Now imagine how much money they’d be giving away to the bankers if they owed $18,000, or even $25,000! They’d never be free, unless they started paying big chunks off the principal (by sending in extra payments). Now we will define Debt Slavery by what it is NOT—namely, freedom.

Americans pride themselves on being free, but how free is a man who:

Those traits describe someone living in serfdom or slavery, not freedom. It describes someone living under a tyrant—who takes most of the peasant’s income, and just keeps them alive enough to keep working for him. The tyrant tells them how many children they can have, and forces even women and older children into public service projects. The land, the house they sleep in, and the animals they work the fields with do not belong to the peasants, but to the tyrant. 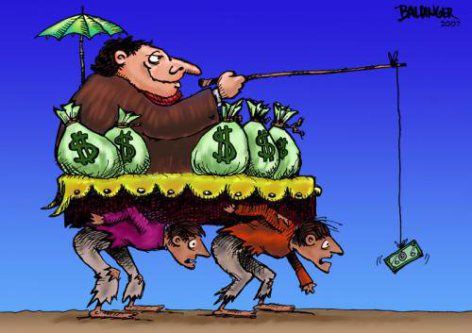 The tyrant today is not the government (although Income Tax is something surprisingly new in our nation’s history). The tyrant is the network of banks, which conspire to suck people dry at every turn, which causes such a drain that both parents have to work. This alone causes countless problems in the world today, because children were meant to be raised by their parents. They were not meant to be wards of the state.

On a side note, I am not a “good little consumer”. I contribute almost nothing to the banking system—neither paying interest, nor giving them money to lend out at exorbitant rates to other people. If I kept $5,000 in the bank, they could lend out $50,000 at 6 or 7% interest, while only paying me 3% interest on that $5,000. Talk about massive profits! Banks can lend out 10X their cash reserves, due to the structure of the Fractional Reserve banking system. Now you see why the banks want your business! Whether you’re a saver or a spender, they can make big money off of you.

I stick to reality—if something does not make sense (like every man, woman and child making 8% each year, every year, on the stock market) then I do not participate. Sure, money can be made on the stock market, but once in a while the whole thing crashes because it was puffed up like a marshmallow in the microwave—just begging to pop. The same with real estate. When money can be made without any effort on my part, I become VERY suspicious. How possible—or moral—can that possibly be? Who am I exploiting to make that money? I know for a fact that money cannot produce more money by just sitting there.

Our fractional reserve monetary system is a blatant fraud on the American people and the world, compounded by interest which is nothing but legalized extortion.

Wakeup, America! International bankers and their usurious money system have done a massive bait and switch on the American people – taking away our real freedom and sending us to kill and die not to protect ‘our freedoms’ but to enslave others.

So, next time someone tells you freedom isn’t free, tell them it would be if it weren’t paid for in phoney dollars – AT INTEREST.