Yogi Berra, a Hall of Fame catcher for the New York Yankees whose mangled syntax made him one of the sports world’s most beloved and frequently quoted figures, died on Tuesday at the age of 90, Major League Baseball said.

“We mourn the passing of Yankees icon and Hall of Famer Yogi Berra,” the MLB said in a tweet.

The Yankees said in a tribute on Twitter: “We are deeply saddened by the loss of a Yankees legend and American hero.” 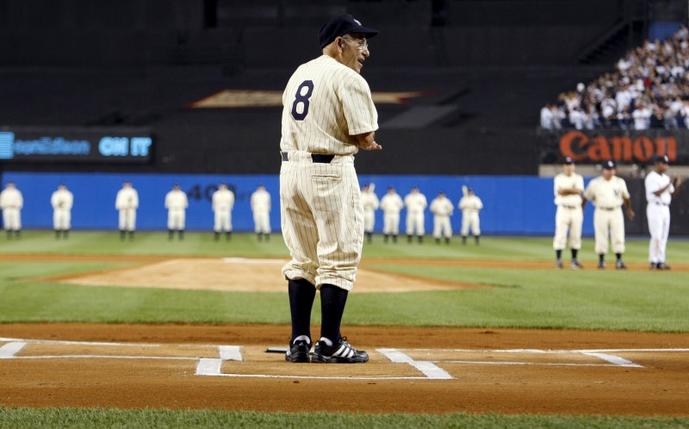 Lawrence Peter Berra, known to the world as Yogi, was a tough catcher and a feared clutch hitter who helped the Yankees dominate baseball from 1947 to 1963.

On a team packed with great players like Mickey Mantle and Joe DiMaggio, Berra led the Yanks in runs batted in for seven consecutive seasons.

He won the American League’s Most Valuable Player award three times in the 1950s, was a 15-time All Star and entered baseball’s Hall of Fame in 1972.

After retiring as a player, Berra became one of only six managers to lead separate American and National League teams to the World Series.

Berra’s baseball accomplishments were sometimes overshadowed by his linguistic shortcomings. Some of his statements were head-scratching malapropisms while others sounded like warped Zen koans or deep Yoda-like wisdom.

His “Yogi-isms” were repeated by presidents, Wall Street titans, comedians and anyone else who wanted to sound wise, funny, folksy – or all three.

“I don’t know why I say these things,” he once told Reuters in an interview. “But people understand me.”

George W. Bush quoted him while stumping for the presidency in 2000, saying Berra might join his campaign. “Yogi could be my policy director,” Bush said. “He could say, ‘When you come to a fork in the road, take it.'”

Berra also appeared as himself in TV ads that played on his tangled expressions to sell everything from insurance to a global credit card to the Yoo-hoo chocolate drink.

Berra was born May 12, 1925, in St. Louis, the son of poor Italian immigrants, and grew up in the city’s “Hill” Italian section. He quit school to help his family during the Depression and played baseball in local leagues.

He often told the story of a friend who said he resembled a Hindu holy man, or yogi, whenever he sat around with arms and legs crossed waiting to bat, and the name stuck.

The Yankees signed Berra for $500 in 1942 and assigned him to the team’s minor league affiliates. He later enlisted in the Navy and was a gunner’s mate in the D-Day landings on June 6, 1944. After the war he became a Yankee regular by 1947.

His career coincided with a period of Yankees dominance, and he appeared in 14 World Series. He won 10 championships and established records for World Series games in at bats, hits, doubles, singles and games caught.

Berra was the catcher in one of the greatest games in baseball history, Don Larsen’s perfect game in the 1956 World Series against the Brooklyn Dodgers.

He later managed both the Yankees and their cross-town rivals, the New York Mets, to World Series appearances.

In 1999 he was included in a list of the 100 greatest baseball players compiled by The Sporting News, and fans voted him onto baseball’s All-Century team.

Yet Berra’s achievements did not come easily. From his arrival at Yankee Stadium, when a lowly employee said the newcomer would not last because he did not “look like a Yankee,” he was ridiculed by opponents and reporters for his short, rotund frame, large ears, speech and his seeming inability to throw, catch, run and learn the strike zone.

He acknowledged how the insults had hurt in a book.

“I’ve been called some awful things,” he wrote, yet it motivated him to work harder at his skills.

“There are probably a half a dozen people in the world that are universally loved. Everybody loves Yogi,” former teammate Jim Bouton told the Boston Globe.

“There’s an essential sweetness about him. He’s without guile. That’s about as kind of a thing you can say about a human being. He’s one of the great people in the world.”

A falling-out Berra had with George Steinbrenner, the Yankees’ blustery principle owner from 1973 until his death in 2010, demonstrated Berra’s steelier side. In 1985, Steinbrenner promised Berra he would get a full chance to manage the team but then fired him the third week of the season – sending a proxy to pass on his decision.

Berra vowed never to return to Yankee Stadium as long as Steinbrenner owned the team, and for 14 years he stayed away. Eventually, Steinbrenner traveled to Berra’s museum in New Jersey and apologized.

Berra was treated like a celebrity wherever he went, but despite being in the public eye for nearly six decades he remained intensely shy.

The cartoon character Yogi Bear was named after him, something he did not appreciate after occasionally being addressed as Yogi Bear.

In 1998 he established the Yogi Berra Museum and Learning Center in Upper Montclair, New Jersey, built by a non-profit group to honor him.

Berra was married to Carmen Berra from 1949 until her death in 2014. They had three sons, one of whom, Dale, played in the major leagues.