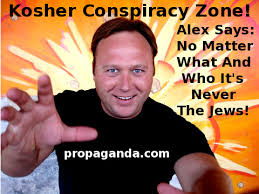 Di$info Jone$ isn’t even worth talking about anymore. The real Truth movement and alternative news crowd has disowned him long, long ago. Contrary to what he tries to tell the uneducated, he was never the “leader” of anything in our movement. He never contributed anything new, he never moved his followers act on anything but making Di$info some money.

But there has been one lingering question: who pulls the fat little loudmouth phony’s strings? Who’s paying him the big bucks to make us look like idiots and mislead thousands of young people when they first step away from the MSM camp? Who pays Di$info Jone$?

Looks like he answered that question last night. The Mossad pays. That’s who.

While trying to keep a straight face on his Sat. night radio show, Di$info said this while reviewing the Debkafile’s story which basically said the two brothers did it because they were radicalized by Islam:

“You can say what you want about Debkafile, how it’s run by a bunch of Mossad and Shin Bet people, I’ve found it overall to be pretty damn accurate” Di$info Jone$

Shin Bet is Israel Security Agency Sherut haBitachon haKlali. The Mossad is the Israeli version of the CIA. Their motto is “By Deception Make War” or something to that effect. Debkafile does even attempt to hide what it is. “DEBKAfile (Hebrew: תיק דבקה‎) is a Jerusalem-based, English- and Hebrew-language, Israeli, open-source, military intelligence website with commentary and analyses on terrorism, intelligence, security, and military and political affairs in the Middle East.”

It’s pure Israeli military intelligence, filtered through the propagandists of the Mossad, and packaged up as “alternative” news… basically the same thing Di$info serves up.

Now think about this: Bloomberg has his intelligence division go to Israel a couple months ago to train with Israeli intelligence. Then the bombing happens in his friend’s town Boston. Bloomberg sends his intelligence team over there to help out after Bloomberg’s WMD-CST team “helped” onsite during the bombing and of course it has been reported (by me) that Israel also sent over their police commissioner to help with the “investigation” on Tuesday.

Now we got a story from Israeli military intelligence and the Mossad saying that the two boys were double agents who turned on American and blew up civilians in Boston? And Di$info Jone$ helps peddle it?

Ok. Is there any question anymore who he works for?