Chinese NASA Worker in US Court Over Computer Cache 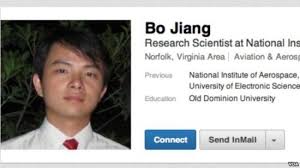 WASHINGTON, March 21 (RIA Novosti) – A former Chinese contractor with the NASA appeared in US federal court Thursday, his lawyer said, after he was arrested following an attempt to fly back to China carrying laptops, hard drives and SIM cards in his bags.

Bo Jiang, a former employee for National Institute of Aerospace (NIA)—a NASA contractor in Virginia—has been charged with lying to the federal agents who questioned him Saturday as he boarded a Beijing-bound flight with a one-way ticket at Dulles Airport outside Washington.

Jiang was under investigation for possible violations of the US Arms Export Control Act and had previously traveled to China with a NASA laptop that a US Federal Bureau of Investigation (FBI) agent believes contained sensitive information, according to the FBI’s request for an arrest warrant in the case.

When asked by federal agents what electronic items he was carrying in his luggage, Jiang failed to disclose a laptop, an old hard drive and a SIM card that were in his possession, according to the warrant request.

In the wake of the arrest, NASA has moved to clamp down on foreign contractors’ access to the space agency’s facilities, NASA chief Charles Bolden told US lawmakers in a hearing Wednesday.

“I’ve ordered a complete review of the access that foreign nationals are granted at NASA facilities,” Bolden said.

Jiang, 31, appeared Thursday before the US District Court for the Eastern District of Virginia, his lawyer, Fernando Groene, told RIA Novosti. His arraignment was scheduled for March 28.

US Rep. Frank Wolf, a Republican from Virginia, told a news conference Monday that whistleblowers at NASA informed his office that a Chinese national—later learned to be Jiang—was provided access and information at the agency that “he should have otherwise been restricted from receiving.”

Wolf told the news conference he was concerned that the information the suspect allegedly attempted to take to China “may pertain to the source code for high-tech imaging technology that Jiang has been working on with NASA.”

“This information could have significant military applications for the Chinese People’s Liberation Army,” Wolf said.