Corporate Disease: Workers are a Cost not a Productive Resource 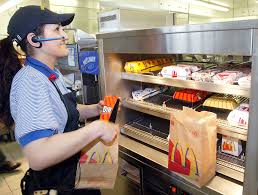 Now we have a number, limited as it may be: the amount in public assistance received by families of people who worked as cooks, cashiers, and in front-line jobs in the fast-food industry – workers who’re dogged by low wages, part-time work, and scarce employer-provided health benefits – amounted to nearly $7 billion per year. This, in essence, is a way for the $200 billion-a-year industry to do something our corporate welfare queens excel at: shuffle off part of the costs of doing business to the hapless taxpayer.

The mix in the fast-food industry is particularly toxic, according to a new report that relied on data from the Census Bureau and public benefit programs for the years between 2007 and 2011: a median wage of $8.69 per hour for a median work week of 30 hours. Only 13% of these workers received employer-provided health benefits. Among those working 30 hours or more, 17% received health benefits. That compares to 59% for the whole work force.

So this might work for high-school kids living at home, or for college students trying to earn some extra spending money. But only 23% of the workers were 18 or younger. And only 9% were single adults in school, living with parents. The rest were adults who were not in school. And 26% were adults with children!

Lacking subsistence level income, 52% of front-line fast-food workers rely on the top five Federal programs to get by. And forget about retirement. There is no way to save. And Social Security benefits, at these income levels, are going to be minuscule.

But the $7 billion a year represented only a sliver of this strategy’s cost for the taxpayer. The report only focused on the largest federal public assistance programs: Medicaid and the Children’s Health Insurance Program ($3.9 billion), Earned Income Tax Credit ($1.91 billion), food stamps ($1.04 billion), and the Temporary Assistance for Needy Families program.

It did not include benefits from other Federal assistance programs for which data was not readily available, any programs at the state and local levels, or any subsidized housing programs. It only covered those fast-food workers who worked at least 10 hours per week, for at least 27 weeks per year. And it did not include other industries.

But the fast-food industry wasn’t alone. In the “Agriculture, forestry, and fisheries” sector, 35% of the workers’ families received benefits from one or more of the top Federal assistance programs. “Other services” – including personal services, laundry services, and repair and maintenance services – were in third place at 33%. “Leisure and hospitality” in fourth place at 30%. The rate for the entire workforce? 25%. At the bottom end was “Public Administration” at 15% (chart for all industry groups).

If all workers in all industries and all Federal, state, and local benefit programs were added together, it would amount to a dizzying number – and a huge transfer of corporate operating expenses (payroll and benefits) to the taxpayer.

Did the report, Fast Food, Poverty Wages, have an agenda? Sure. All reports do. The monthly jobs report by the BLS has an agenda. Every iota that the Fed utters or publishes has an agenda: it’s designed to manipulate the financial markets. This report, authored by Sylvia Allegretto and other economists at the University of California, Berkeley, and at the University of Illinois at Urbana-Champaign, was funded by Fast Food Forward, which had helped organize the labor actions in the fast food industry this summer in support of a higher minimum wage.

Many cities and some states are either contemplating, or have already implemented, their own minimum wage that exceeds the Federal minimum of $7.25 per hour. In San Francisco, it is $10.55 per hour. The city is expensive, and it’s unlikely that a single worker with a child can subsist adequately on just that wage alone. There are numerous local, state, and Federal benefit programs available that might make it more possible – but now we’re back to shifting operating costs (payroll and benefits) from companies to taxpayers.

From a corporate perspective, it’s good policy. With a little lobbying money to grease the wheels in Washington, tax loopholes open up and other corporate benefits appear on the horizon, and big contracts get handed out. The financial markets love it. Transferring payroll and benefit expenses to the taxpayer is just part of the scheme.

But it has broader implications. Every time a company announces that it will offshore production to a cheaper country, the financial markets love it and the stock goes up. Outsourcing to contractors in Bangladesh with murky working conditions? Even better. A major well-timed layoff announcement to counteract an earnings miss? Stock jerks up. Layoffs are good – cost cutting being one of the strategies for our revenue-challenged corporate heroes to grow their “adjusted” earnings.

In this way of thinking, workers are no longer the most important productive resource the company has. They’re no longer the force that causes revenues to grow and orders to be processed and customers to come back. Instead, they’re reduced to the same level as printer paper, fuel, and tires: they’ve become a mere cost. Something that needs to be cut.

When the great bubble blew up and became the financial crisis, panicked companies axed hundreds of thousands of workers on a weekly basis. When the dust settled, they’d shed millions of workers. And they’d made structural changes. When hiring restarted, it wasn’t for those jobs in the US that had been shed.

The report found that between 2007 and 2009, middle-wage occupations accounted for 60% of the job losses. But when job growth resumed, feeble as it has been, middle-wage jobs represented only 20% of the hiring. Low-wage and often part-time jobs made up the bulk of the so-called jobs recovery. This data has been confirmed on a monthly basis.

These corporate decisions make sense to executives afflicted with short-termism, worrying about the quarter, their bonus, and stock options. But it has produced falling real wages and an under-utilized work force. The top echelons in the corporate world are making out like bandits by cutting costs; the rest (often the “costs” that are being cut) are struggling. They represents those intrepid consumers whose combined effort is needed to get the economy to take off.

The fact it has failed to take off over the last five years – despite the $3 trillion the Fed has handed to the top echelon – is another sign that people aren’t just a cost, but a productive resource in an economy. And cutting that “cost” isn’t, in the long run, particularly helpful.

Alarm bells went off: “Yellen props stocks,” the headline read. Somebody needs to. Politicians are actively contemplating how to most effectively send the largest and brokest debtor in history into default. Corporate revenues can’t keep up with inflation. Earnings estimates and actual earnings growth plunge. And the S&P 500 soared 16% year to date. Read…. “Yellen Props Up Stocks” And Other Scary Data Points

4 thoughts on “Corporate Disease: Workers are a Cost not a Productive Resource”